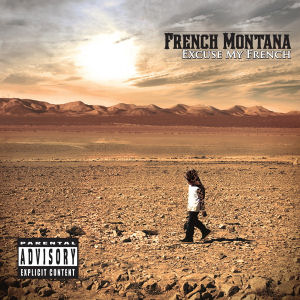 'My first album had no famous guest appearances, the outcome, I'm crowned the best lyricist' - "Got Ur Self A.." by Nas.

Looking at the abundance of guests featured on French Montana's debut "Excuse My French", I can't help but think of Nas' line from "Ether". It's difficult to know what is more surprising, the fact that "Stillmatic" is now twelve years old, or that rappers still insist on putting features on near enough every song, on an album that is supposed to welcome the world to your talents. Admittedly, French Montana is an artist I've heard of, but not necessarily heard. Considering his debut is linked with Bad Boy and Maybach Music, it's what type of fan this album is aimed at, and it doesn't seem to be hip hop fans. "I Ain't Worried Bout Nothin'" doesn't even make sense, and considering the hook is just that line repeated consecutively with the n-bomb thrown in after each utterance, it's cringe worthy stuff. At least "Pop That" tries to be fun, feeling like a modern 2 Live Crew record, yet French Montana is out-rhymed by Rick Ross (which says A LOT about the level of emceeing we're looking at). It's also sad to see the likes of Drake and Lil Wayne completely waste their talents, with Wayne even pretending that he is a skateboarder in the video. As infuriating as these guys' rhymes are, I've always got time for Nicki Minaj despite her rapid transgression in to a pop icon. "Freaks" sees Nicki do her thing with a catchy chorus but ultimately disappoints lyrically (FYI guys, she is effectively topless in the video). French Montana however, is an abomination:

He can't even stay on beat, which for somebody signed to Bad Boy is shameful. How did Diddy go from Biggie Smalls to French Montana. There's not even one record that highlights why Diddy signed this dude, and it's glaringly obvious why there are so many producers, writers and features throughout "Excuse My French". The album isn't a complete waste of time, however. "We Go Where Ever We Want" is essentially a re-jigged "Ice Cream" from Raekwon, featuring the Chef himself and Ne-Yo in fine form. French actually manages to drop a tolerable verse, and the track is decent but ultimately not a patch on the original. Another redeemable song here is "Fuck What Happens Tonight", a posse cut with DJ Khaled's trademark bass-heavy anthem sound that steals heavily from The Diplomats' "I Really Mean It". Mavado does his thing, Ace Hood is surprisingly fluent while Snoop Dogg's personality is still oozing charisma no matter how old he gets. The big surprise is Scarface, who drops a brutal verse that wouldn't sound out of place on an MOP record. The rest of the album meanwhile, is cookie-cutter 'floss-rap' that caters to the lowest denominator. I can see strip clubs playing some of the more sexually explicit records, but for everybody else, this is the type of dumbed-down mindset that has seen fans drift away from hip hop over the years.

Ultimately, "Excuse My French" is an insult to the people of France. Littered with ignorance, braggadocio and uninspired production, French Montana's debut release is less about him and more about the guests that his label have brought in to help hide his lack of skills. He doesn't drop one nice line, rarely carries a beat with any authority, and actively promotes an image that hip hop really should be moving on from. This is not only a very poor hip hop album, but twenty years on from Bad Boy releasing "Ready To Die" by The Notorious BIG, it seems Diddy has a lot of explaining to do.