GDP and the Wrong Address :: Holla

:: Run For Cover Records
as reviewed by Steve 'Flash' Juon 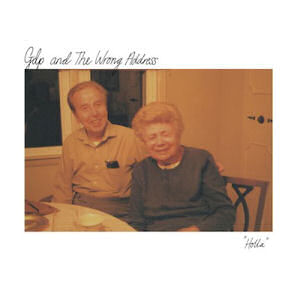 GDP is quintessentially New Jersey - so much so that his vocal tone could be rap's Jerseyite prototype. Either he sounds like Young Zee, or Zee sounds like GDP - you make the call. Since I consider Zee an unheralded star of hip-hop and his shelved "Musical Meltdown" album a classic, GDP certainly benefits from the comparison, as I could listen to anybody who sounds like him all day. Coincidentally he uses the phrase "all day" a lot in the song "Mascara":

Production notes aren't included with my press copy of GDP's "Holla," but whoever did "Mascara" made it appropriately downbeat and moody to match the anguished tone of the rhymes. "Your insecurities left you ignoring me" sums up the troubled relationship he broke off well, with his pronunciation making "insecurity" and "ignoring me" sound like perfect rhyme when in fact it's a slant rhyme. The significance of the technique is not to be taken lightly - it's a careful choice of words AND their delivery on GDP's part that makes his emotive construction that much more impressive. This is not simply some sad sack crying into his beer about his lost love - GDP is putting power behind his feelings of hurt, betrayal and anger. Perhaps it's the troubling nature of relationships that leads him to seek out a casual sex tryst in "Friends That Fuck."

Unfortunately it doesn't seem that being friends with benefits works out much better for GDP. "I lose my stomach when I think of sweet nothings you would whisper in my ear while I was coming/found someone else/said you can't love me if you don't love yourself." He's a tormented soul, but this is a different look for GDP, who last time out was more focused on being high and weird. Some of this short album is just instrumental interludes (like "All Roads Lead You Here") but the full length songs like "Catanoia" are worth the price of admission.

"It's last call and I got a lot to think about
Last pull off my last cigarette
And I know how you hate it when I chain smoke
Things will never be the same though
In the city where the only steady business
is parking garages and writing people tickets
I just called to tell you that I missed you
You respond like an igloo..."

Powerful metaphors in rhymes always get my attention, and I can't imagine a better one to rhyme with "you" that GDP could have used to summarize a chilly relationship. Any time a rapper drops a bar so well that you can't fault him or think of a better one he could have used instead, hand over the props. The only fault I can assign GDP on "Holla" is simply that 20 minutes is not enough. He's really on one here, and perhaps would not have been had he tried to artificially extend the subject matter beyond it's natural length, but I would have enjoyed the attempt.