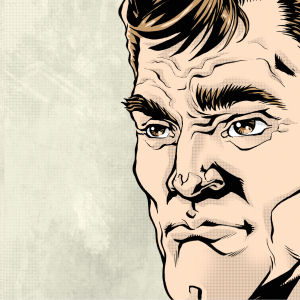 "- Once killed the entire Marvel Universe
- Made Chuck Norris say, 'Uncle'
- Warns psychics
- Cuts through hot knives with butter
- Lost his virginity before his father"

The comic book album cover is another indication that Castle isn't on some super tough ish. Then there's the fact that he sounds a bit like Redman if Redman had gone to college instead of doing hallucinogens. Castle shares the Brick City rapper's deep voice and smartass sense of humor. That comes through loud and clear on "Prep Time":

"So I top telling squares I make music
First thing they do is look at you like you're stupid
'Everybody raps and everybody makes beats'
Yeah, that's cool dude  but everybody ain't me
Got heat like a hooptie with a broken AC
But you aren't concerned why a label never chased me
Please
All that bullshit you can miss me with it
Go somewhere and find yourself a bucket and kick it"

If Castle is laughing, it's to keep from crying. There is an undercurrent of seriousness that runs through the album. Castle is a funny rapper, but he's also rapping about failed relationships, friends and families lost to drugs, and the dismal job market. "Orientation," imagines Castle at an orientation for a horrible job that is all too relatable. He's greeted by a boss who says:

"Welcome to the family!
You're here for minimum wage in exchange for your sanity
And take orders from tyrants who are stripped of all humanity"

"I kinda figured. I was thinking I should leave this gig alone
But the job market is crappy and I still have student loans
So forget it
Right before work I'll just get really stoned
To deal with the thought that I'll probably always be a drone"

"Krillz" is about people in his neighborhood who are struggling:

"I caught a scene that derailed me
Older head on the ave, the crack had reduced him to frailty
Never spoke, but I heard his eyes tell me, 'The system failed me'
[...]
High dose of that fructose making them folk obese now
Inflation increase now
Them McDonald's burgers ain't cheap now
It's why that crackhead's sucking dick for that sedative
It's why my cousin's hugging the block as if it's a relative
Auntie calls him evil, he should be seeking a reverend
But homie has a daughter the fact it's wrong is irrelevant
I just hope he survives
Pray that he'll make it out
Shaking the devils off before they shake him out"

Castle does all the production, offering a mix of  uptempo and slower tracks. "No Prep Time" has the strongest beat, with booming drums and a clattering organ riff.  A lot of the songs are built around dusty breaks, but he also throws in some ambient and psychedelic sounds.Most of the tracks are downtempo, which gives the album a low-key feel. The slower, more serious tracks show off what a thoughtful writer Castle can be, but they put a damper on the album. By the album closer "The Punisher Kills Hip-hop," a brooding song in which the rapper kills hip-hop, I was missing the witty smartass of "Fool's Errand" and "Cruising on Fumes."

Despite the somber mood that pervades a lot of "Gasface," there is enough clever wordplay, one liners, insightful verses and good beats to make it worth checking out. After all, any MC that has taken out the entire Marvel Universe deserves a listen.