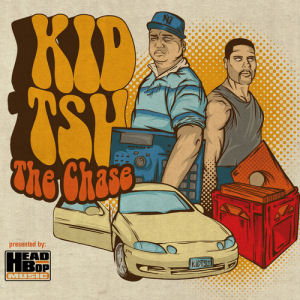 Kid Tsunami is not the latest luchador to splash through your television on CMLL, nor is he a new video game protagonist inhabiting a realm of dangerous bearsharks and monkeygators. He's not starring in Kick-Ass 2, and he's not the latest marketing gimmick for Sun Drop to tell you how unexpectedly good their drinks are. Here's what the comic book-esque named Kid Tsu IS though - a producer from Perth, Australia with a decidedly throwback production style and sound. The fact he cites Diamond D, Pete Rock, Large Professor and the Beatminerz as his influences should tell you all you need to know. His alter ego could be Captain 90's. Lord knows guest star Sean Price has enough alter egos to go around for both of them - and he's the partner-n-rhyme of "Bang Exclusive." It's a rude awakening - nobody safe!

Judging by the list of talent on "The Chase" it's fair to say Kid Tsunami's reputation proceeds him. You could hardly come up with a better who's who of emcees you would want over hot beats, and in keeping with his Captain 90's soundscape, these are many of the hottest rappers from my college days. J-Live blesses the bars on "a brand new shout to the past" called "What It Was." Andre the Giant is still a giant in the mental if not stature on the mellow jazz and refreshingly boom bap track "The First Letter." Masta Ace jumps from the 1990's to "Twothousand40" as scratched in samples set up his laconic flow lovely. El Da Sensei, Bahamadia, Prince Po, KRS-One and O.C. are just a few of the names making up this beefy selection of talent - high in protein and low in filler. The title track really ups the ante though - Buckshot, Chubb Rock, Jeru the Damaja and Pharoahe Monch. You might as well call this one "Crooklyn Pt. 3."

I'm hard pressed to find anything bad to say about Kid Tsunami other than to take playful jabs at his nom de plume, so I'm gonna leave you with this: if you're nostalgic for what my friend K-Murdock calls "progressive rap" I think Kid Tsu's "The Chase" is what you're looking for.