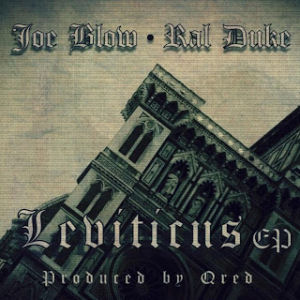 Not to take anything away from the MC's, but I'm going to go against the norm here and talk about the producer of this release before anything else...

We all have this certain artist we like; the artist that you feel you are the only person in the world that knows about; the one you believe would be close to enough to a legend in the underground hip hop scene if only the right opportunities arose. Qred from Wales is that artist for me. He's been releasing music since the mid 90's, both as an MC and producer, initially as part of a group called Ruff Intalect, and later working in a solo capacity and also collaborating with other artists (he also concurrently works in the Drum & Bass realms). He has many redeeming qualities as an overall hip hop artist, but most outstanding (and relevant to this review) is that he is from the school of hardcore beats; beats that hit direct with force, and he wants you to feel those drums pound through to your inner core. Most things he touches have a sinister darkness to them, not quite horrorcore but more a gothic Mobb Deep "Hell on Earth" ambience with touches of the rawest side of golden era UK hip hop, add an industrial bleakness to the mix, and you have Qred. If you happen to take the time to listen to the "Leviticus" EP (emceed by fellow Welsh residents Joe Blow and Ral Duke) and enjoy the production, then I urge you to also seek out Qred's albums such as "Dungeon Siege", "Backstreet Lobotomies" and "Courtyard of Lunatics".

For all my familiarity with Qred, the MC's are relatively unknown to me as I've only heard them as brief guests on Qred's albums. A background check tells me they are part of a Welsh collective known as Squid Ninjaz (started up by Joe Blow), and after hearing this EP I'm going to be looking deeper into what else they have to offer.

Joe Blow seems to be the elder statesman of the two, rhyming with a controlled and authoritative cadence, but also sounding disgruntled and world-weary, as opposed to Ral Duke who carries more of a youthful energy and venom. They work quite well together, with neither really presenting as the dominant figure, but Ral Duke is slightly more appealing to me with the malice in his style combined with a quirky, almost ragga tinge in his voice. For the most part they spend their time lyrically bigging themselves up and taking out wack MC's using violent imagery to match Qred's landscapes of impending doom. Frankly though, with their song "Eye of Newt" they could be rapping about taking their grandmothers grocery shopping and it would still be an incredibly pure, unrefined hip hop listening experience. As far as I'm concerned, tracks like this often set UK, Australian and European hip hop apart from the US material. The back to the basics, “old school” approach has always maintained a stronger grasp in those regions over the years outside hip hop's spiritual home, and those non-US parts of world have generally maintained a healthy fascination with the 4 elements of hip hop (i.e. graffiti, emceeing, DJ'ing, B-boying). "Eye of Newt" celebrates a couple of those elements at a pretty base level; the two MC's rip with vicious intensity, one verse each, over a simple and thumping break-beat with DJ Jaffa cutting up behind the chorus. As straightforward as this may seem, the essence of hip hop couldn't be more prominent here and it's a wonderfully appealing track for all its simplicity:

Most of the vocal tracks on the EP use a similar template to "Eye of Newt" as their backbone, but with a few add-ons and features that set them apart from each other. "Ill Armchair" has layers of suspense added to it using off-kilter piano keys and horns that emit cliff-hanger tension. Very interesting here is that Qred manipulates the chorus samples creatively using interjections of quotes from many various emcees. The production on "Stalk Them" eases back on the heavy beats, and instead is a more sparse, almost lo-fi track that provides an alone in a dark alley feel, with the two emcees taking on roles of sex-crazed stalkers: "call me boogeyman coming through your window/spyin' on your girl with a pair of thermal binos". "Nylon Mask" on the other hand oozes in Hitchcock suspense instrumentally. It's actually Ral Duke going alone on the track, and his rhymes are pretty exemplary of what occurs lyrically throughout the album i.e. exaggerated violence which has enough tongue-in-cheek to it to give it character:

"MC's know the beast, so why you wanna beef
I'll leave your face missing, all their findin' is your teeth
Yeah I rose from beneath, I'm back for the blood
I'm breakin' out my coffin and crawling through the mud
It's all for the bud, and the bud is laced
But man I love the taste, everybody baggy's getting blazed
I'm a savage on the grave, I'm mashin' up your face
Livin' in this place is like "Planet of the Apes"
Try sendin' me to space, and I can't escape
I'm lost in this room and now I'm stuck with these snakes
And I'll fuck up these fakes so their rhymes are so waste
So I'm snatching your mic and I'm giving you the shakes
I'm a killer on the breaks, I'm diggin' in the crates
We're blowing up ya tower block, like livin' in the States
I'm blowing up your gaff, I'm coming for your stash
I'm kicking down your door and I'm swinging with an axe
Or I'm swingin' with a bat, it doesn't really matter
I'm poundin' in your head, yeah watch your brains splatter..."

We even get an international collaboration with US rapper and sometime Immortal Technique cohort Diabolic joining the Welsh lads on "Sodom". Qred kicks up the tempo here and brings us an urgent and formidable track that would make a wicked Army of the Pharaohs joint, but it's no less appealing held down by our three emcees. DJ Jaffa totally annihilates the "Sodom and Gomorrah" vocal snippet (amongst others) on the chorus with the wheels of steel and it's appropriately ferocious cutting within a very powerful overall soundscape:

Unfortunately Joe Blow's solo track "No Place to Cry" seems misplaced on this EP, and as it appears smack bang in the middle of the EP it kills the flow for me. I have no way to know if it's a fictional tale or if he's speaking on his reality, but he gets very personal and launches into one of the most scathing attacks on an ex-partner that you can imagine, talking about slitting her with a razor and killing her together with her new man. Whilst I'd like to think those things aren't to be taken literally, when he says "my time with you in this world was the shittest" it does seem like he's speaking on his reality. I realise Joe is trying to stick with the brutal imagery that the EP is built on and work that into a different context, and obviously he's very pissed off, but the personal feel doesn't blend well among the other more fantastical tracks. It might have worked better on a 15 track album of varied content where a few different themes were at play. Qred actually threw me the farther looping curveball here, as gone is the darkness and the hard drums, replaced by a generic sung soul sample and insignificant beat, a formula which is everywhere these days. It's the selfish listener in me but it's not what I want to hear from the man, and teamed with the rhymes from Joe Blow the track seems like it became lost on the way to another album and ended up here.

The EP is bookended by Qred's instrumental intro and outro, titled "The Gods are Here" and "Gutter Level" respectively. The intro having an epic feel with equal amounts of movie dialogue and excerpts from Joe and Ral's verses interspersed with the music, and the outro is a more low-key presentation using a nice classical sample over head nodding drums. At the risk of this review sounding even more like a promo write-up for Qred, dark and cinematic instrumental hip hop is another forte of the man and he has a few instrumental albums that are worth seeking out also, under the alias of Spektre (not to be confused with Spectre of Wordsound fame, who coincidentally is a kindred spirit of dark instrumental production to Qred).

Admittedly I've never been much of a fan of the EP format; when the music is good it's too much of a tease and has you wanting more, and when it's more varied there's often too little to gauge a proper feel for an artist. Despite its brevity, “Leviticus” does succeed in letting us know exactly what Joe Blow, Ral Duke and Qred are about, and aside from the mid-section misstep it's an excellent EP which displays hip hop in a very pure and hard-hitting form, especially if you like material of a darker nature. No doubt though that it all flies by very quickly and leaves this reviewer wanting more, so it's a bit unfulfilling in that way. How about an album next time guys?