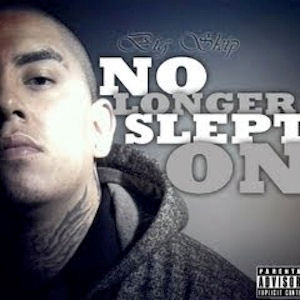 Big Skip is a mystery to me - both before AND after reviewing his "No Longer Slept On" mixtape. The source who sent me his album for review had only a Hulkshare link, and when I pressed her for more, she was able to come up with a YouTube channel that features him along with several other artists. Even though we all know it's dangerous to make assumptions, I'll take a leap of faith and assume that New Peoples Army is at best the name of his label, and at the least the name of the crew he rolls with. That works for me on an Odd Future level for identifying his imprint, but still tells me nothing about him personally. The most I can glean is that he's a rapper from San Antonio, Texas out there hustling.

"Uhh, and that's a line for you to think about
I'm in and out the trappy nigga, you should see my bank account
She tellin me I'm lovely; I don't need no ho to hang around
All I need is me my stacks and niggaz that I know get down"

"I Be Wit It" is fairly typical of Big Skip's style and flow. His braggadocious banter consists of witty lines like "I don't even stink, but God damn I'm the shit/I'm the closest thing to real that any nigga ever get." The good news is that as rappers go, he's well above a Gucci Mane in terms of his pronunciation, rhyme writing, and flow. The bad news is that he throws a shout out to Chief Keef and then raps over "Diamonds" on his own song "Ready for War." I can't really endorse doing either of those things.

Since the loosely organized "No Longer Slept On" is a mixtape, and a lot of these beats originally had homes elsewhere, I'm going to just toss scoring the music out the window. The focus here is on whether Big Skip can make it out of San Antonio and become a larger known factor regionally in Texas, throughout the South, or possibly even nationally. He's certainly got the topic matter to blend in with the commercially successful rappers of the day - praising marijuana on "Smokin Good," promising to get turnt up and drop nothing but "HeadBanga" music, and he does have a natural degree of swagger in both his accent and his ability to switch from slow to fast flows.

To really see if Skip can take it to the next level though, I need to see how he does with a producer who has original material, and what he can make of that. Can he rise to the level of say a Gene the Southern Child given time? Possibly. He's not there right now though, and needs to keep hustling and recording. If he avoids relying too heavily on trapping stereotypes and creates music that's personally meaningful to himself and his listeners, he's got the potential to succeed.