:: Just-Us
as reviewed by Matt Jost 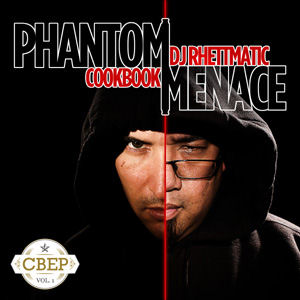 Why "Phantom Menace"? Because it's the first episode in a series of EP's that pairs CookBook with a different producer for each release. World Famous Beat Junkie DJ Rhettmatic gets the honor of the first dance, providing the L.A. Symphony alumni with lean Left Coast productions anchored by his expert cutting. On the opening title track he supports Cook's mockings of competition with sharp bursts of derisive laughter:

CookBook is pretty outspoken on this EP, but moreso than other people's career choices he analyzes his own. Introducing himself with the succint self-description "From Puerto Rico, face and vocals gringo (...) head-butt MC's like Ochocinco" and concluding with the confident "It ain't stopped bein' fun yet / My guess is I ain't done yet," he nevertheless struggles to reconcile certain elements of his career. Particularly his background as a Christian rapper seemed to have posed some problems, which he discusses in several songs here, spanning from the early stages to today when he's still forced to defend himself against accusations like "Book stopped believin' - Cook's been deceived - CookBook is a heathen."

But he also reveals his own naivety and envy in "Heisenberg":

"Symphony journeys turn into hidden bitterness
It burns me learnin' that my former cohorts is limitless
MURS is a millionaire, Scarub is killin' it
While Cookie crumbles under pressure carin' 'bout little sh...
Doin' these church shows but don't feel legitimate
Reachin' the tippin' point, it's time to be flippin' it
This is my life, but I'm not really livin' it
That is the catalyst that has me have to get real with it
Livin' in accordance with an unseen majority
Whose wants hold me back but none of them are supportin' me"

"I'm Thirsty" continues the theme over the EP's most hard-edged beat, the thumping and rattling percussion supporting biting observations like "2009 I thought I could have a career like Evidence / (Yeah right) ...Been failin' at it ever since" and "At first I thought these Christian fans would keep supportin' me / But no dice, these pro-lifers aborted me."

There's a time and place for everything, and if it's on this EP where CookBook comes to terms with these things, then that's completely okay. It resulted in above-average rap tracks like "I'm Thirsty" (with ingenious "Shook Ones Pt. II" cuts) or "In Your Memory," dedicated to his father - also on a recurring topic but special nonetheless as it also addresses Rhettmatic's dad. This one also comes with a classic quote, but DJ Rhett's best pick might be the Phife quotable he uses in "Accolades": "If I don't say I'm the best, tell me who the hell will?"

In short, the "Phantom Menace" EP is good for what it is, even as the Phesto-featuring closer "Let's Go" sounds more like the beginning of another episode. It features a rap artist expressing and explaining himself to the best of his abilities. This being my first time I dealt with Book more intensively, I can say that his forte as a rapper probably lies in his writing, moreso than the vocal performance. The press release quotes him as saying, "In these songs I go harder than I have in the past, and I don't hold anything back." If he went even harder in his raps and Rhett also went a little bit harder in his beats, "Phantom Menace" would be more than just good. Still if you have an inclination for rappers who represent the "good kid, not unlike Kendrick" (as he describes himself in "Heisenberg"), give CookBook a try.