Dirty Dike :: Return of the Twat 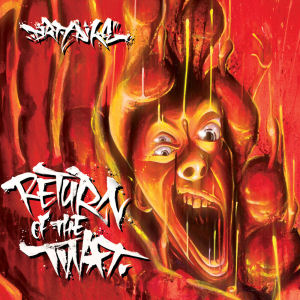 Dirty Dike has been popular amongst the British Hip Hop scene over the last few years, and I was made aware of him thanks to his "Pork Pie" single in 2011. Not only was he a refreshingly immature personality, he got away with it thanks to some technically astute lyrics. "Return of the Twat" is actually Dike's third album, and he's not grown up one bit.

The single "Return of the Twat" feels like some early Big L work, with internal rhyme schemes aplenty despite the childish and ultimately ignorant content. Of course, it sounds nothing like Big L, but the unabashed harshness in the language and delivery is reminiscent of the legendary Harlem rapper. The problem with this release is that it's let down by being too damn repetitive. Every track sees Dike boast about how dirty he is, how he inexplicably has a lot of sex and generally acts proud of being many parent's worst nightmare. "There He Goes" is one of the best beats I've heard all year and actually benefits from Dike's aggressive demeanour.

Another track worth your time is "Catch Me If You…Nah", a short and pretty pointless story documenting Dike (presumably) escaping the police. The beat certainly isn't pointless, a jumpy, throwback Naive production that bangs harder than, well, a dirty you-know-what. And that's where the strength in "Return of the Twat" lies, the production. Even the magnum opus of the album, "Future Posse Cut One Thousand", a strong lineup of the cream of current UK Hip Hop, sees only Dr Syntax and Stig of the Dump provide any real creativity in their verses. It's a real shame because it just proves that their characters are infinitely more interesting than Dirty Dike. The other emcees, including the usually reliable Fliptrix and Verb T resort to doing their best Dirty Dike impression, and the track becomes redundant after three minutes due to each verse being the same example of 'this is how grimey I am, and I don't care what you think'.

There are flirtations with more insightful songs such as "Rapping Over Silence" where Dike shares his grievances with the state of hip hop, which although covered by a billion other rappers, is at least better than inane cursing. Thankfully there is some truly excellent production on Dirty Dike's third album from Pete Cannon and Naive, but Dirty Dike's act is wearing thin. There's only so many times you can hear a man acting like a yob, because other than mild variations on the theme ("Catch Me If You…Nah") this release is hard to recommend unless you're fifteen and still find words like 'twat' and 'cunt' hilarious. Despite this, it's worth picking up (perhaps in instrumental form) for the monstrous beats. Ironic given the undeniable ability Dike has at rhyming, it's just not that entertaining any more.