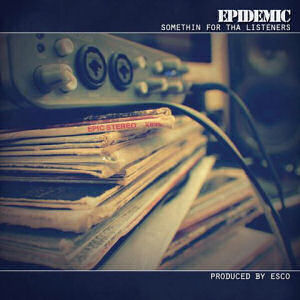 Epidemic have been quietly releasing worthy throwback albums that revel in the 90s sound. Granted, I'm a sucker for 90s hip hop, and us Hip Hop writers regularly laud it as the greatest time for rap music, but artists that release music as if it still is the 90s tend to end up releasing forgettable records. As nice as it was to hear 5th Element's production on "Illin' Spree", it was the two emcees – HexOne and Tek-Nition, that stood out. Weaving words around snares has almost become a forgotten art yet 2011's "Illin' Spree" and last year's "Monochrome Skies" were examples of plain old dope emceeing and effective production. Personally I found the records a little devoid of much energy, and thematically hollow, but "Somethin For Tha Listeners" is definitely third time lucky, made even better by the fact they found a superb producer in Esco.

Growing up, I've enjoyed numerous rap duos like Das EFX and Smif N WEssun, and didn't know (or particularly care) which emcee was killing it the most – they complemented each other in a way that at times it was hard to differentiate each persona. Epidemic are slightly more distinct, but offer a friendlier form of Golden Era that's amiss of the gun talk and sinister atmosphere. "One Life" is a mature offering, blessed by an incredibly basic Esco beat that's basically, incredible. It's precisely the timeless approach that helped all those boom bap albums from yesteryear stay in your system. An example of less is more, in the vein a DJ Premier beat is beautifully simplistic, Esco consistently provides backdrops for Hex and Tek to rhyme their asses off to.

"Mic Masters" is some grubby Boot Camp Clik shit, with some of the guys' best flows but suffers from poor content. "They Don't Know" is another example of unexplainable illness. If you enjoy boom bap, sometimes all you need is a soulful beat with hard drums and fluid flows. Many have tried to replicate the much-lauded Golden Era, but the likes of "They Don't Know" and particularly "UNIversALL" demonstrate that a dated approach can still work in 2013. Minimal piano keys sound golden when combined with scratches and the laid back manner of Hex and Tek. At times they sound like slowed down versions of Busta Rhymes, dispersing multi-syllablic words alongside bunches of shorter words to provide a "Gimme Some Mo'" rapid-fire feel. But where a Busta or a Tech N9ne add intensity, Epidemic sort of fade in to the production at times. This is the sole downfall with their albums, a lack of personality. Some tracks show a lack of emotion ("Poisonous Love") when tackling themes such as rejection, but this is me being pedantic. Tracks such as the summertime jam "Cool Out" and the aforementioned "One Life" are perfect examples of "real rap" without the forceful agenda many rappers insist on pushing on to the listener.

There is the feel of Pete Rock & CL Smooth throughout each of Epidemic's albums ("Rhyme Writers" sounds like it was left off "Mecca & The Soul Brother"). "Something For Tha Listener" never quite reaches the levels of pure fun that those two legends could provide on their first two efforts, but musically there is a timeless quality to this record, thanks mostly to Esco. At times it can feel like HexOne and Tek-Nition are just rapping to a beat, but dig a bit deeper and you'll find some intricate rhyme patterns. Regardless of whether it has much substance, there is an innocent charm to "Something For Tha Listener" that is quite simply, a very nice listen.