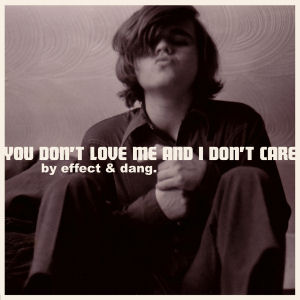 Over the years Boston has produced some talented and, at times, under-appreciated hip hop artists. Most people who know a bit about underground hip hop would be familiar with names such as Ed O.G., Krumb Snatcha, Mr. Lif, Akrobatik, Termanology, REKS, 7L and Esoteric, and of course the late Guru. MC Effect and producer Dang don't share the same notoriety as those artists, but their album "You Don't Love Me And I Don't Care" is a big step in the right direction towards raising their status closer to those bigger names. In fact, they belong right next to those names based on the quality of this album.

Effect has actually been around for a few years, having released a few solo albums/EPs, and also has a couple releases with veteran Bostonite D-Tension, under the guise "Los Wunder Twins Del Rap". Effect's last album, "Simply Dope", was also produced by Dang, and for this new album Dang's name is taken from the liner notes of the last album and put alongside Effect on the cover to represent them more as an official duo, and what an impressive duo they are.

The album's name and cover suggest something you'd expect to find filed alongside Fall Out Boy and My Chemical Romance in your local record store (if your city still has one), but it's far removed from anything like that. Effect mentioned in an interview that the cover is actually a picture of his father looking badass when he was young, and the title is a reference to a sample on the album which Effect liked so much that he named the album after it. More significantly, the album title also represents Effect's status in hip hop, being an artist who hasn't received a great deal of recognition thus far, but perseveres with the art he loves and keeps doing things his way regardless of what people think. "Respect That" sums up his mind-state, DJ Slipwax cutting up a Dre sample: "I don't need your respect, I do it coz I want to, not to stay in the game, fuck the fame, I'm still stayin' the same". I love this attitude from rappers.

I find it quite fitting that Esoteric is featured a few times on the album, as there are similarities between him and Effect. The two emcees don't sound anything alike vocally, as Effect is higher pitched and more precise with a sharp, scythe-like venom in his flow, but the similarity is more in the way they both bring combinations of deft mic skills, humour, character, story-telling abilities, and probably most appealing is both come across as every day relatable guys and not self-righteous or artificial. The liner notes suggest Esoteric has been a mentor or advisor of sorts to Effect and the influence is apparent. Whilst my train of thought is running along this section of rails, it's also worth noting the likeness between Dang and 7L in the raw yet creative style their musical compositions hold. Both bless their emcees with music that has a lean to the golden era, but they bring a creativity which ensures their respective sounds feel fresh and never dull or played out.

Eso appears in the form of the chorus sample on the hyper opening track "Whatupwhatupwhatup (?)", and Dang fills the space underneath the beat with what sounds like samples from the B-52's or similar acts from the 70's. "Rap Terminators" appears next and features a mid-80's bassline and funky strings for Effect to mix it up with a verse from Eso in full flight, and Celph Titled also appears with his usual "gatalog" of limitless metaphors. Effect brings the Eso-Pterodactyl aboard one more time on "Headphones Lie", where they are joined by other Boston talents Termanology, D-Tension, Illicit and Mic Stylz. The track is an all out attack on wack rappers, with our posse of MC's being in denial and disbelief at the sounds coming through their headphones, and each MC provides an entertaining verse with his own take on the concept. Most impressive is the production of Dang, as he builds the tension with dramatic strings and other subtle change-ups as the track progresses. In fact, Dang's attention to detail on the whole album is SUPERB, as each song is full of little nuances and small background variances that keep the interest level to a maximum. This dynamic approach to his production leads to new discoveries on each subsequent listen to the album, which is a trait that not so many producers possess. There's a touch of Prince Paul to him in that regard.

For all the talk about Esoteric, I'm not ignoring the effectiveness of Effect, as he is definitely his own MC. "My Life" is an example of Effect's personal and honest lyricism, he often allows us into his world on the album but never to the point where it feels intrusive. He might not care about not being well known, but for the listener who wants to know more about Effect, he takes the time to introduce you to his world and doesn't leave you feeling detached:

"Money." is another example of Effect speaking on his own reality, telling us it's not all about the C.R.E.A.M. for him, but having some wouldn't hurt, and he even gives a nod to the stereotypes of hip hop: "I'm too old to grab a ski mask and gat, and rob motherfuckers and blame it on rap". Dang once again adds a nice 70's feel with the samples, but the driving beats are pure hip hop. "She Likes Me" and "A Rabbit in a Pot" are two jams for the ladies, or rather about the ladies. REALLY refreshing here is that they are anything but the typical smooth lover-man jams; they are actually the two darkest cuts on the album. "She Likes Me" details Effect having a seemingly innocuous meeting with a groupie, but the situation unexpectedly turns out for the worst as he ends up being a victim of circumstance, the alarm sound throughout the track cleverly transforming into a police siren to match the outcome. It's also a good example of the narrative skills of Effect, and interestingly he does some double time rapping on the track, which has him sounding a LOT like Big L. "A Rabbit in a Pot" is an ode to the movie "Fatal Attraction" with Effect being attracted to his own types of "psycho bitches", and the track is appropriately injected with an ominous darkness and horror movie sounds.

I like that the album is also a celebration of Boston hip hop at times, which is probably already apparent if you've read this far and noted the appearances by some of Boston's hip hop luminaries. Another Boston contemporary, REKS, appears on "Never too late", where Effect displays a very admirable show of respect and sincerity in the lead-up verse which welcomes REKS onto the song:

"I never worked with a cat that I thought was wack
Ask Term who's the first to ask him to collab
That was back when we ran on the exact same track
He ran laps and became one of the best out of Mass.
Worked with every artist that I ever showed respect
The only one I haven't worked with yet was REKS
Always wanted to, but never got it together
Now he's better than ever, better late than never..."

It's also a very personal auto-biographical track detailing parts of the hip hop career path that Effect has taken and it does remind me of songs Eminem has done, but actually Effect doesn't particularly remind me of anyone overall, he's quite unique.

"Puerto Rican Rum" is Effect at his most colourful and witty, whilst still giving the listener little snapshots into his life. It's one of the more creative and genuinely funny hip hop odes to alcohol that I've ever heard (as a non-drinker they often bore me). The Spanish guitars within the track, whilst expected, are very addictive, as is the DJ work by Slipwax again, this time chopping up the La Coka Nostra chorus sample:

"My father chose Johnnie Walker, and I chose rum
Grandmother drank Malibu and mixed it with some
Diet Coke at the party, she would often let me have a couple of sips
So I guess that left the impression in my mind that I would give it a shot
When I was older coz I wasn't really into pot
Malibu was like candy, shit's what, 7 proof?!
So I switched to Captain Morgan and I hit the roof
Sailor Jerry's good too, but expensive as shit
No matter what the brand is, it has to do with a ship
Or some gold and a sword and a pirate and shit
So it's only ethical you should pirate this disc
[...]
I know Captain Morgan hates me and that's alright
He acts like he's my boy, at 9 o'clock at night
Til I wake up at 4, sweat all on my face
Heart beatin' "Little Drummer Boy", snare-drum pace
Then I want to kick the barrel out from under his feet
Stab him with his own sword then I'll step and repeat..."

Despite quite a few instances of humour and wit, the overall feel of the album is actually somewhat dark, but there's a variety that keeps it engaging and diverse. "Falling Apart" is a lively track, backed by very horny horns, and the combination of a strong chorus by Akrobatik with verses by Effect, Illicit and Pat G, makes for an enjoyable listen. Effect and Dang even take time to extend a tribute beyond the realms of Boston with "When Dang Rocks the SP", which is another bouncy jazzed up joint, interpolating Black Sheep's well known "The Choice is Yours" chorus, and it even gives an acknowledgement to Too Short with the track's finale. The closing track (which happens to be the title track) is Dang in his funkiest mood and it contains the addictive soul sample that the concept of the whole album is based on. The song is also the full hip hop resume of Effect, where "Better Late Than Never" and a couple other tracks contained bits and pieces of it.

Frankly, I haven't enjoyed an album this much for quite a while. It's one that caught my expectations off-guard too, as Effect's last album was pretty good but not on this outstanding level. Yes there are a few guests, but that doesn't hold Effect back from establishing his own identity on the album, nor do they outshine him, and as mentioned above it actually gives the album a secondary purpose of being a celebratory piece for Boston hip hop. I also can't help thinking about and being impressed by the attention to detail by both MC and producer, it seems they've given their all towards every section of every song. In that regard this is truly a work of art. For example and in comparison (and no disrespect to the man as I'm a big fan), as much as I enjoy albums by Apollo Brown, some of those beats sound like they took him all of 5 minutes to create and there's nothing on "You Don't Love Me ..." that feels like that. What the hell, I've harped on so much about Esoteric in this review I'll mention him once more, and say that his album "Czarface" with Inspectah Deck was poised to be my album of the year (so far anyway), but even that album seems a bit "by the numbers" compared to this effort. Effect may not care but he's getting love from this reviewer, and along with Dang they are getting a perfect score for this album.