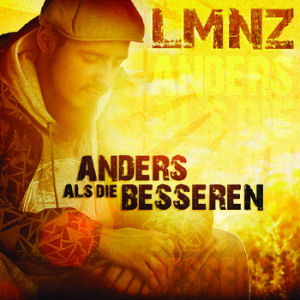 In 1995, Lost Boyz dropped their criminally slept-on debut album, "Legal Drug Money." The album's second single "Jeeps, Lex Coups, Bimaz & Benz" included a hook that contains the line "And to the hoods, east coast, west coast, worldwide." It's almost guaranteed that Germany's LMNZ took this to heart. For proof of this, look no further than his 2010 release "Worldwide Rap" — an album that featured artists from all six habitable continents in a true demonstration of the belief that hip-hop is undoubtedly universal. LMNZ is back at it again with "Anders als die Besseren," which translates to "Different From The Better Ones" in English. The title is a play on the phrase "Besser als die Anderen" which translates to "Better Than The Other Ones." The album features production from the likes of Cleast Intwood, GUTS, Batsauce, Beat 2.0 and of course LMNZ himself. Much like "Worldwide Rap," the guest list is quite extensive, featuring twenty-seven artists overall.

The album opens up with LMNZ and Paco Mendoza on "Tranquillos." LMNZ spits in German and Paco does his thing in what I assume to be Spanish as Loomis Green adds a bit of extra flavor with some tight guitar plucks. Sometimes music provides that much needed escape from the troubles of the day and on "Travelogue" LMNZ, Nosliw and Bajka are the captains of the spaceship to take us away to a more pleasant time and space. "Face" and "Fehlgeleitet" are both delivered in German by a going for dolo LMNZ. Even if you don't understand a single damn word, the GUTS production on the former song pulls you in and on the latter, the "Between The Sheets" sample stops you in your tracks and makes you take notice of what's going on here. Gunman Xuman and Bettina Meske join LMNZ for "Will You Go On" as we find LMNZ effortlessly comforting a young lady that is stuck in a bad relationship and needs to make a change...who just happens to be naked in his bed. Gunman takes a different approach, calling for the listener to make the right decisions in life and live better. "Ich Machs Einfach" features some nice violin and trumpet work by Domenica Kastl and an appearance by Wanja Janeva. "118" finds LMNZ delivering a speedy-but-precise flow that over the course of three verses leaps from topics that range from Bart Simpson to Marvin Gaye. In a clever twist, the title "118" refers to the number of times the word "art" appears within the verses, whether on its own or inside another word. LMNZ bumps into an old flame on "Club" and while he has intentions on perhaps having another go-round with her, but before the plan comes to fruition, he's confronted by a dude with different ideas.

"La Melange" is followed by "The Move," an examination of the differences between the haves and have-nots. LMNZ questions the fairness of this game of life, declaring that the powers that be want us all to be stagnant and unproductive in life. In the closing verse, he questions our ability to leave our comfort zone, but ends on a positive note, reminding the listener to seize the day and be the change we hope to see. It's the perfect compliment to "White World," which follows the track. "I Don't Give A" and "YOTB" precede "2nd Chance" and if you've ever had a near-death experience that made you reconsider your approach to your daily life from that point on, then LMNZ is telling your story here. MC Kah joins LMNZ on the Batsauce-produced "This Is Life" which finds our hero painting a stark contrast between a relaxing vacation and a decidedly more harsh reality, eventually being able to find solace basking in rays of sunshine. Voice joins LMNZ for the sultry "We Wanted" before giving way to the lyrical exercise that is the M!c King-featuring "Authentic." The album begins to wind down with "Some Things" but not before the far too brief "Scheibenwischer" and the masterfully-produced "Maodun." The affair closes with a pair of songs that seem destined to be linked together in "Sun" and "We Shine." The former features some stellar saxophone playing by Charles Cooper of Liquid Crystal Project.

Three years back when I wrote my review of "Worldwide Rap,"I suggested that the listener give that album three honest listens to fully appreciate it for what it was. This time around, I'll once again make the same recommendation. A slight difference here is that the unification aspect of the album isn't as much of a big deal here. On "Worldwide," the intent seemed to be to let the listener undoubtedly aware that they were listening to an album comprised of emcees from all across the world. On this album, things are more tightly crafted and the artists involved just happen to be from various corners of the world. With English being the only language I speak fluently, I don't fully get all of the lyrics, but that's nothing a little Rosetta Stone or even a cursory visit to Google Translate can't fix. If all else fails, I can always nod my head to the beat and enjoy the vibe — just as I did with that Lost Boyz tape way back in '95.