:: Fill in the Breaks/Literati Music
as reviewed by Steve 'Flash' Juon 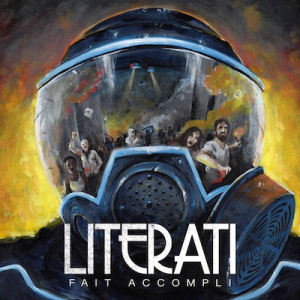 Literati is a Minneapolis by way of Sweden rap team consisting of rapper Mercies May and producer Caesar. The former apparently got "deported back to the United States," so he was only there long enough to develop a jaded attitude about American cultural complacency. Meanwhile Caesar was making a name for himself in the Twin Cities with his beats, to the point that when the two teamed up they were a perfect fit for Fill in the Breaks. Those who know the FITB imprint are probably familiar with rapper/producer Ecid, but a strong roster of local Minnesota artists has filled in the blanks around him.

Having dipped their feet in the water with the EP "Real Pain For My Sham Friends" in 2011, "Fait Accompli" is their full length arrival on the scene with 12 tracks and almost 45 minutes of material. The title itself is a summation of their position in the competitive Twin Cities rap scene - a way of saying "we're here and for real and we ain't goin' nowhere - so deal with it." Not even a sudden blast of "Tear Gas" can make them stop standing their ground and run - they are firm in their beliefs. There's also a fair bit of despair in songs like "The Future," where they seem to believe humanity has taken a turn for the worse:

"With pinned eyelids we sit silent
And we keep buying the speeches of tyrants
Preachers teaching the sheep compliance
And we the people can't deny that..."

The unnamed singer on the hook provides some balance though, and her vocals combined with the hard hitting electronic backdrop make the entire song reminiscent of a Swollen Members track. Mercies doesn't have the jagged brutal beauty of Madchild, but he does have just as much to say, and perhaps in declaring himself "My Own Worst Enemy" he and the SM rapper would find some common ground.

There's undeniably something charming about this group that stands out in the crowded Midwestern rap scene. Perhaps it's the willingness to experiment with different flow styles on songs like "Parade." Perhaps it's the deft touch Caesar shows on production for surprisingly gentle songs like "Shade and Shadow," where Mercies whispers like LL Cool J on "I Need Love." Whatever it is though I can't easily write off "Fait Accompli" and I'm not even going to try. What I can do is chuck hyperbole out the window and give you straight facts. Are they the greatest thing since sliced bread? No. Are they going to change the world of rap music as we know it? No. Will their exposure outside the Midwest be high? Possible but unlikely. That's okay though - Literati don't seem obsessed with being rich and famous. If they're content with making quality music for a small but like-minded audience "Fait Accompli" is indeed a done deal - an irrefutably dope fact of musical life.