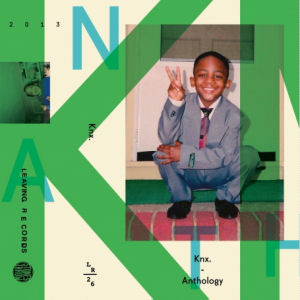 Knx, aka Knxwledge, is an L.A.-based beatmaker who has been putting out his work on Bandcamp for the past four years. This anthology collects fifty-three beats from his fifty-two Bandcamp releases (http://gloof.bandcamp.com). Beyond being incredibly productive, Knx sets himself apart from the trend in hip-hop by charging a premium for his goods. While a lot of rappers are giving away their music for free, a Knx EP will set you back five bucks, and he charges ten dollars for a ten-track "album." That means that exploring his entire discography would set you back over three hundred dollars. To put that in perspective, a box set of the complete studio recordings of the Beatles is selling for $178 on Amazon. I'm all for an artist getting paid for his or her work, but it seems gutsy to price your work higher than the one of the most beloved musical acts of all time. Thankfully, Leaving Records has released this anthology, which will only set you back $12 for the MP3s, (the double-cassette version is sold out).

Knx is a reclusive artist, steadily putting out music in his home studio and staying outside the mainstream. As a result, his music has a insular feel to it. You can tell he is making this music for himself, not to get a party started or ride the latest trend. He does remixes, but none of those show up here. Instead it's a whole lot of downtempo, melancholy instrumental hip-hop. Knx seems inspired by Dilla and Madlib, and takes the same crate-digging approach of those two producers. He flips and chops a sample up until it is unrecognizable by music fans and copyright lawyers alike. He mines mostly jazz and soul records, which gives his music a warmth and soulfulness that is missing from a lot instrumental hip-hop, which is more interested in exploring electronic music than obscure jazz records.

The downside to this is that the tracks all have a erratic choppiness that gets old quick. The whole tape has a throbbing stutter that gets in the way of any sort of groove. The songs are all a little off-beat and out of tune, which makes them unsettling and frankly irritating. I enjoyed the beats in small doses, but I found it impossible to listen to all 53 at once; it becomes like listening to a skipping record.

I'm open to the possibility that I just don't understand what Knx is laying down. His music is definitely interesting. I appreciated his use of samples and the sad mood he sets; I just wish it was more enjoyable as a listening experience.