Lefty :: My Views :: DatPiff.com
as reviewed by Steve 'Flash' Juon 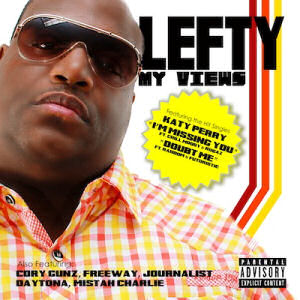 Rap artist Lefty has several things in common with Random a/k/a Mega Ran, not the least of which is that he's a Philadelphia native who eventually wound up chilling (or perhaps more accurately cooking) in Arizona. I don't think we're going to see a mass exodus from Philly any time soon, but Lefty is more than willing to exploit this coincidence. Random appears on three tracks throughout "My Views," and some of Philly's other rap sons are on the album as well - Journalist and Freeway to name two. On the Hexsagon produced single "Katy Perry" though, Lefty is all on his own.

"Uhh, that's that Katy Perry in full effect
Full effect - her feelings hurt she comin for yo' neck
For yo' neck - a scorned women that want respect
But still diss you award shows
That's the only way she can relieve her stress
Game changin, player hatin, no refs around so she foul and flagrant"

Damn - I had no idea Katy Perry was such a bitch! Lefty is using her name as an example though, describing a woman who uses people for personal gain, and I suppose that it's conceivable that the fictional female archetype he describes may have qualities in common with the real star of the same name. It's common for rappers to name songs after celebrities though just to achieve more recognition, which is why I fully expect an emcee to drop a song called "Darren Young" any minute now. My favorite track on "My Views" drops no names though - it just makes a simple statement - "Doubt Me."

Lefty: "It's funny that they say they down for me
Then I turn my back and then these motherfuckers frown on me
It's funny - that's what you get when you got clown homies
Them sorry fuckers, they'd never bust a round for me
Listen - homey - keep the squares our your circle
Snakes is lurkin with the intent to merk you
Huh huh! I ain't worried 'bout nothin homey
Do me a favor stop runnin 'round frontin homey"

Mr. Throwed sets just the right tone with a laid back piano melody for both Random and Lefty to flow over. Production is well above the average for a free mixtape in general. Alex Minor's "Protect the Child" is hella smooth, while DCee's chopped up R&B samples on "I'm Missing You" are highly enjoyable. These two provide a majority of the production on "My Views" and are Lefty's best partners. I wanted to like ELJay's lone contribution "Game On," but it sounded like a bad knockoff of Southern rap bounce, lacking the bass bottom to pull off the imitation.

Lefty hits a lot of the right notes on "My Views," and I'm pleasantly surprised by the cameos. Even Cory Gunz, son of legendary Uptown rapper Peter Gunz, drops a nice verse along with the lesser known Rugaz on the track "Ain't Fucken Wit Me." Minor's production on the song is even better - echoing and reverberating in ear pleasing fashion. Lefty himself is a very nice dude. He talks big and bold on "My Views" but was very humble and patient waiting for this review (much respect bro). Lefty's flow on the track is technically sound, his vocals are crisp and clear, there's charisma in his delivery - and yet he stays in a storyteller mode that makes me wonder "What makes Lefty different?" He never says anything bad or embarrassing, and that's a plus, but lines like "Back to the topic at hand/wanted to be the man overseein the man/waterin all the plants overseein the land/God damn, brother man are you seein my plan?" on "Wanna Be" sum up my problem. The bars lack OOMPH. If he changed up his rhyme scheme more or dropped a few OMG punchlines I'd be more hyped about Lefty. He's like a linebacker who plays the position well that everybody respects who is overshadowed by the flashy QB and the motormouth running back. Lefty needs a little more pizazz.