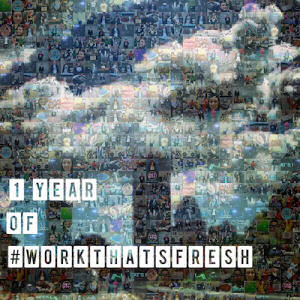 RR recently delved into the world of Hey WTF Records with Lawnmowher's "novembre amour" album. They're a relatively new crew on the scene, but this Boston-based label ain't takin' no shit. They are passionate about their progressive artistic hip-hop, and at least if Lawnmowher's album is any indication, they're on the right path. As such I wanted to take another chance on the crew and check out their celebratory album "1 Year of #WorkThatsFresh," signaling 12 months of survival when many well intentioned indie labels fold in half that time or less.

As a sign of just how seriously Hey WTF takes their efforts, I got a heads up about the album before doing my review: "The last two tracks are bonuses that aren't visible/streamable online." It's a small thing but it's also appreciated given I don't have to apologize later if I talk about something that people complain isn't on Bandcamp when they go to listen to or preview this album. Incidentally those two tracks are "Ayo Brain (We Meet Again)" by Brian to Earth x Mike Wagz and "Reasons for Using Meditation Beats" by Ryan Lucht (also the founder and head of Hey WTF). The latter is an amusing pastiche of vocals reminiscent of a West coast turntablist paired with a beat that lives up to the billing - in fact I could swear I even hear a gently burbling stream in the backdrop of the drum track. It's very hypnotizing.

Background elements are very important to the Hey WTF producers. It's the same reason you can hear a scratchy crackle and pop behind the light electronic tune and sharp taps of "eenvironment" by ewonee. What Hey WTF strives for above all else is music with atmosphere. In an empty room, with your eyes closed, these songs fill up the space in your physical AND mental presence. And though there's a definite amount of hip-hop attitude to the sampling and arrangement found in songs like Dataka's "When They Begin," it's a playful and welcomed form of swagger - like a video game designer purposefully hiding easter eggs for you to find. The vocal samples in the track make me want to hunt.

Though it may seem braggadocious for a label that just celebrated their first anniversary to declare everything they do "#WorkThatsFresh," I see and hear nothing on this $3 album to contradict that statement. Yes, only $3, although as always with Bandcamp you can pay more than that if you choose to do so. If you feel that under a half hour of music is only worth that much, I can respect it - especially given this is mostly instrumental (although Brian to Earth has a nice flow for "Breathe (In-n-Out) and the bonus track). If you wanted to go above that though, the quality deserves it.