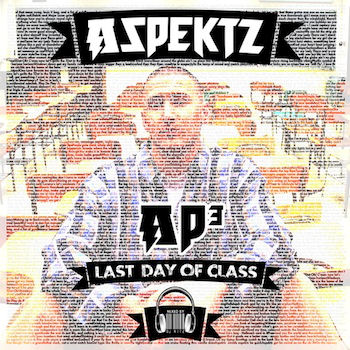 As much as I object to Wikipedia's draconian "notability" policies, and their practice of accusing anybody who objects to a call for deletion as "sockpuppets" (as though disagreeing with their holier than thou decisions somehow makes you a mindless drone clone), I did have to wonder if Aspektz really deserves the entry he's got. I take nothing away from his accomplishments - not many rappers have a MBA, have done an album for HBO to promote Kenny Powers, or have had their music featured live on air during coverage of the Olympics. On the other hand not a single one of his albums to date has received CRIA or RIAA certification for moving units, and to my knowledge he's little if at all aired on the radio outside his native Toronto. In fact when I looked at his zip file in my "unreviewed albums" folder, I couldn't even remember who he was. No offense meant to Aspektz, just real talk.

I gave Aspektz "Academic Probation 3" a fair shot just like I would any other emcee, but my enthusiasm was immediately tempered by the fact he's not rapping over original beats. I know that's the hallmark of well over 50% of mixtapes available at DatPiff or anywhere else, but the "Teach Me How to Dougie" beat has been so played out by now that "Progression" was dead on arrival - even if he was the greatest emcee in the world I wouldn't be enthused. The DJ he has scratching him in and out of songs and doubling back on his vocals is no worse than the typical late night program on Shade 45, but certainly not any better. An exhaustive search of the 48 minutes of "AP3" for some next level rhymes was for naught. Even though he's from the T-Dot, you could easily mistake him for a rapper from New York, New Jersey or Massachusetts. There's not much culturally distinctive about him, with songs like "Richard Branson" just bragging about his wealth. Yawn.

"French cuffs, rolled up to my elbow
Tom Ford three piece suit, and crisp shell toes
Chopin, Tchaikovsky and cellos
Twins on my plate like double stuffed portobellos
[..]
Crisp every day, it's not even a question
Call up Playboy, you can say I'm Hugh Hef'n"

The problem here is that even his similes and metaphors lack punching power. "Spit fresh like I just left a dentist" are the opening words to the "Fire Flame Remix," and they're the only 8 I need to hear. Aspektz has all the technical skills necessary to perform - he's rhyming, he's not out-of-breath, he can keep the tempo and he can enunciate clearly. None of that means a God damn thing. I don't hear any passion in his delivery, I don't hear any supremely clever lyricism in his wordplay, and I don't know why he's not using his MBA to go into business. He clearly doesn't NEED to make the money he brags about rapping - he could go work for a Fortune 500 company and achieve the same platinum status if not more. I suggest he do so.