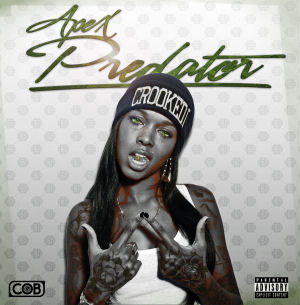 Slaughterhouse may well be a fully developed four-headed monster that are known for their lyricism, but they are still failing to fulfil their potential. "Welcome to Our House" was overly commercial in its direction, with diluted production and a clear Eminem influence running throughout the record. It left a foul taste in my mouth, having been treated to their fine mixtape and equally strong debut "Slaughterhouse". Everybody has their favourite member, and despite happily admitting that Royce Da 5'9'' was the illest rapper alive five years ago (with his "Bar Exam" mixtapes showcasing a man possessed), Crooked I has frequently been the most outstanding performer of the quartet. His insanely aggressive delivery coupled with internal rhyme schemes reminiscent of Slim Shady himself have helped Crooked attain a loyal following. Crooked is as equally cursed as his fellow Slaughterhouse members in that his mixtapes contain a lot of creativity, but his albums just haven't lived up to them. The key difference here is that Crooked hasn't had a legit studio album released until now. "Yodo" kicks things off, and you'd be forgiven for thinking a Rick Ross CD was playing. Musically it is reminiscent of the Miami coke baron but flow-wise, Crooked has dismissed the internal rhyme schemes and complex writing for a more simplistic version of his usual arrogance. Thankfully, "Vegas on Biz" is a return to form, with Crooked applying his multi-assonant vocabulary to high-end living. Name dropping Van Gogh and Prada in the first verse is something you'd expect Jay-Z to do, not a rhyme machine who used to be signed to Death Row. Despite these initial reservations, "Vegas on Biz" does work musically; the Johnathan Elkaer production feels like something Joe Budden cast off his "No Love Lost" project, with K-Young crooning atop a smooth, electronic journey through an evening of flashing lights and gorgeous women.

Crooked leaves the mic crooked on "Let Me Get It", a tongue-twisting song full of technically astute rhymes, but it is Tech N9ne's presence that leaves the whole sound booth crooked. As good as Crooked is at hitting the listener with a barrage of words, Tech operates on another level. "Crook n' Porter" is another vicious slice of hip hop that feels like a Slaughterhouse record, but Crooked told the other guys to stay at home. It was probably advisory given the simile-heavy abuse he gives us.

"Sumthin From Nuthin" is an interesting song, purely because Crooked I has produced the beat. That in itself isn't interesting, but the Rahzel-fused beatbox that accompanies the verses is surprisingly catchy. The issue I have with this song though is that the beat just doesn't mesh well with the rhymes, and given how strong the rest of the album sounds it feels like it could have been a skit instead. "A Lady Fell In Love" is a rare venture in to Crooked's personal life, despite being nothing more than a weak attempt to defend cheating on his other half. Much like cohort Joe Budden, the track focuses on the premise of a young man caught between seeing his friends settling down with families, and capitalising on the current lack of responsibility Crooked has. After years of hearing graphic, sexual lyrics, my ears are numb to the shock value, but I still find it uncomfortable listening to a rapper DEFEND their cheating ways. It just makes you sound stupid, and ignorant rap only works when accompanied by humour (Sean Price) or tongue-in-cheek exaggeration (Styles P/M.O.P.).

As Crooked says on "Crowns", don't ask him who features on this album because HE FEATURES on this album. Ultimately, it is an intense listen and thankfully only eleven tracks in length, any more and it would become too much. Given the lyrical nature of an artist like Crooked, I'd have liked to hear a bit more variety, as what we are offered here is a Slaughterhouse record with one member rather than a true Crooked I album. Sonically, this album is well produced but does have some dodgy moments; "Tell Them Motherfuckers We Made It" cuts right through the most tolerable ear drums, while "No Sleep Gang" is a weak attempt at a Dirty South style anthem that gets drowned out in bass. Overall though, if you enjoy arrogant lyricism with in-your-face production (essentially what Slaughterhouse is all about) then you'll be satisfied with "Apex Predator" – it's just disappointing it couldn't have been a bit more polished and lyrically introspective.