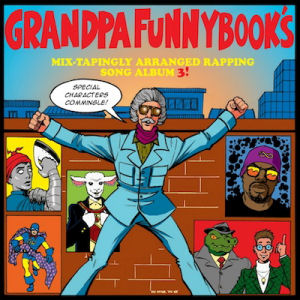 For the third year in a row, Grandpa Funnybook is back with a new free album that coincides with the Toronto Fan Expo. If you were looking for a San Diego Comic Con outside of California, or a PAX located in Canada, it would be the event for you to attend. They did a pretty good job of hyping it up South of the border this year - there were even press releases on wrestling websites saying Toronto's mayor Rob Ford would be arm wrestling Hulk Hogan at the event. Most cartoon and comic conventions these days feature pro wrestlers anyway, although considering his featured role as "The Dean" on the [adult swim] hit China, IL it's fair to say Hogan's more animated than most. (Also ironic given the Saturday morning WWF cartoon from the 1980's DIDN'T use his voice and really should have.)

Whoa - got off on a tangent there. It's not unrelated though since "Grandpa Funnybook 3" celebrates the same elements of pop culture that these cons and expos do. Video game music can be heard throughout, from the "8-Bit Intro" to renowned producer Fresh Kils chopping up the sounds of famed game "Double Dragon," to rap superheroes Mega Ran, Open Mike Eagle and friends rapping on the song "Super Move." I'm slightly confused by the latter as it was on the zip file that Hand'Solo Records sent me, but doesn't seem to be listed on the Bandcamp page. Maybe it's a hard copy exclusive. Both versions include a "Klopfenpop Remix" of Random's song "The Opening Movement" though:

True to its title as "Mix-Tapingly Arranged," the songs on this compilation bleed together (almost) seamlessly into a mix slightly over an hour long. The results are also mixed. Rift & Savilion's "Take You Higher" has an all-star list of guests including Chokeules and Wordburglar, but would succeed even without them thanks to an rap meets jazz swing reminiscent of the late Guru. Nerdy rap icon Dual Core (the duo of rapper int eighty and producer c64) also bring in big names like Ghettosocks and Timbuktu to join them on "Go Figure." Kabuto the Python's "Verdauga Greeneyes" is an intriguing Variant produced track where the protagonist raps like a mixture of R.A. the Rugged Man and D-Sisive rolled up into one. Grandpa's ear needed an amplifier horn for Mikal kHill's "Catelyn Stark" though - his vocal tone doesn't grab me and his singing tendencies don't improve things. The idea behind TuskenHaters' "Duck N Cover" was funny (including the censoring sounds), but the loop is overly repetitive and Ghettosocks cameo can't save the song. For every "Weapon X" by Primordial, there's "A More Blessed Perfection" by Jesse Dangerously - a wall of incomprehensible sonic noise. It's not necessarily that J.D. is a bad emcee though because I enjoyed his work on the last compilation, it's just that the seemingly random (no pun) choices don't always amount to a consistent level of dopeness. It's not a bad album as such, it's just that Grandpa needs a finer touch when he's doing the arrangement.