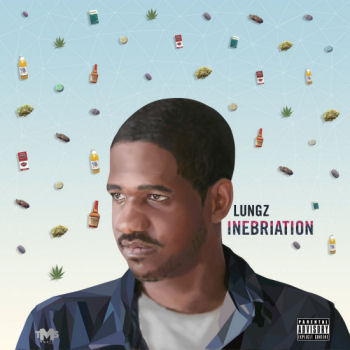 Hungry young rapper Lungz is straight from the Northside of the Chi. His name seems like a fairly obvious rap appelation - to the degree I'm a bit perplexed that in 30+ years I've never seen another rapper use it. In fact I'm absolutely boggled no pro-legalization emcee has ever adopted the name. Lungz is not all about what he's inhaling though - and even though he raps "NorthSide Get the Money" on his (ironically) free album he's not all about the cheddar either:

"If you knew better you'd, do, better...
So can I talk my shit?
Can I move around the city with
something so saditty with the top down, Beat Swizzy?
Cause niggaz don't get me
Fuck that they never will
And shit don't make sense like paper money
I pay my own way, nobody payin fo' me"

For a relative newcomer Lungz seems to be fairly well connected, especially when you stop to consider that Cam from J.U.S.T.I.C.E. League contributes three tracks - "Empty Cup," "Never Take Me Alive" and "I'm Out." He's also got a few high known guests artists as contributors on this project - most prominently King L a/k/a King Louie on "Drink Smoke" and Dizzy Wright on the mellow BP The Producer laced "Sunday Drives." Lungz has an unhurried lesiurely pace, which lends to his confidence in that he won't be off beat or make many mistakes, but also leads to a lack of a competitive edge in his flow. Over time he reminds me of Chicago's answer to an Odd Futurer B-teamer - somebody you wouldn't necessarily fast forward through on a posse song but somebody who doesn't reach out and grab your attention like Tyler, the Creator. He's got concepts on songs like "Time Machine" and "Pictures on the Wall" (the latter has a really smooth piano and bass backdrop thanks to February), but the intricate origami folds to turn the paper writtens into 3D visuals don't pop off.

The assessment may come off a bit harsh to this point, but Lungz still has a lot going for him. His natural swagger and vocal tone are pleasant to listen to, and he does drop a clever line here and there: "They say a picture's worth a thousand words/a drug dealer's dream is worth a thousand birds." The potential for Lungz to blow up larger certainly exists, and the team around him knows how to pair good music to his melodic vocal tone. At this early point in his career "Inebriation" seems appropriate as a free release, because he's good and from the look of things he can only get better. It's not clear if he'll go from the B-team to the A-team, but he's at least above the average.