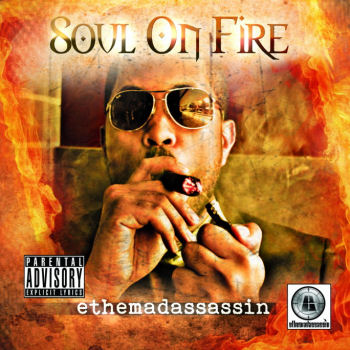 If you spend any time on the Internet over the past few years, you will undoubtedly come across some sort of meme or photo referencing popular culture from the 1990s. Between snapbacks, a Boy Meets World spinoff and Michael J. Fox returning to television, the 90s has made a major resurgence in American popular culture. Hip hop is also fond of that decade, as it has been fascinated with the 90s basically since they ended. So it comes as no surprise a rapper would release an album with dusty samples and a song called "80s & 90s." If North Carolina rapper ethemadassassin set out to make an album that sounded like 1990s hip hop, he undoubtedly succeeded with his third album, "Soul on Fire." The real question is, is this album an homage to "the golden era" of hip hop or derivative of it?

I've had an issue with "throw back" hip hop for the past couple of years. There are some artists whose style is solely based off of music from the mid-90s, and it usually comes off very dated. In 2013, I don't think it's necessarily a good thing for your album to sound like it came out 20 years ago. Sure, there are ways you can salute some of the best years of hip hop music that we've ever seen, but to make a whole album dedicated to it, or even base your whole sound around it, is simply not interesting to me. And that's my main issue with ethemadassassin and his album "Soul on Fire."

ethemadassassin himself is not a bad rapper at all. Vocally he reminds me of early Jay Electronica (especially from the "Style Wars" bootleg EP), and he is pretty strong lyrically. He flexes his lyrical abilities on tracks like "Sparta," "Nothing's Gonna Stop Me" and "Fight Music." On "Can't Get Enough" he compares his love for hip hop to an addiction – a topic that has been done countless times, but he manages to make it into a pretty solid track. He also gets personal on two of the album's best cuts "Letter to Mommy" and finale "Gratitude." Overall there's some quality rapping on this record on every track, but the overall product could've benefitted from more guest appearances. It's very admirable when an emcee wants to hold down most of a record, but ethemadassassin has a pretty monotone voice and a few more guest rappers would've broken up the occasional tedium.

The production, which is handled by seven different producers over the album's 13 tracks, is very cohesive but also sort of monotonous. The nostalgic, boom bap sound wears out its welcome pretty quickly, and is the main pitfall of "Soul on Fire." There are a few bangers on the album ("Gratitude" and "Sparta" are some of the better beats on the record), but most of the beats are sleepy and boring.

So is this album an homage or is "Soul on Fire" derivative of a style that is over 15 years old? I would certainly say it is the latter, but I'm sure there are people out there who would hold this record in high esteem. There is unquestionably an audience for an album with this sound (I'm looking at you, Joey Bada$$ fans), but I personally have no interest in an album that sounds this dated. I can appreciate an artist who does not want to duplicate what is hot at the moment, but I wouldn't consider "Soul on Fire" to be innovative or outstanding by any means.