Prozak :: We All Fall Down 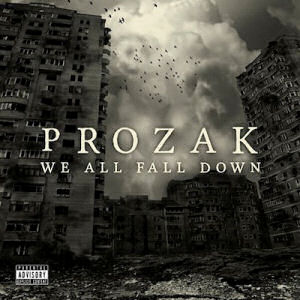 Prozak is the Hitchcock of Hip-Hop - it's both his catchphrase and his rap mentality. Another good description would be "gothic emcee." He doesn't fit neatly into the definition of horrorcore, which is often (and at times incorrectly) associated with shock value. Prozak does talk about the paranormal and supernatural in his rhymes, and is willing to do so in an atmosphere of the dark and macabre. Pro willingly walks a line between Hellraiser and heaven seeeker - straddling the thin line between life's harsh realities and a surprisingly affirmative hip-hop given his honesty and directness with the listening audience. "Blood Paved Road" is a perfect example - it's grim but thoughtful:

"We stole this country from one race without a second glance
And then enslaved another race and forced them to harvest the land
Perhaps it's bad karma from the founding forefathers
This could be the cause of our problems that's comin back to haunt us
Our current state is tainted with AIDS and inflation
And other heinous things that plagues this overpopulated nation
Living in fear of terrorists
Leaving us clearly scared of our mirrored reflections..."

The cover of "We All Fall Down" looks like a post-apocalyptic nightmare, but Prozak clearly survived the destructive rampage. There are no 50 shades for him - there's only the "Darkest Shade of Grey" - a rock and rolling rampage where he snarls and screams "Tell me why we all just hurt each other?" On "Vendetta" he declares he's somewhere "between sanity and psycho" for an uptempo rap over a harsh drilling but not unpleasant drum track backdrop. He is so intensely bad-ass on many of his rip-rocking songs that the quiet moments like "Before We Say Goodbye" stand out that much more:

"We're on the edge now, tell me you can feel it comin
So much left to say before the end, before there's nothin
Hard to put it into words cause I know we're runnin
out of time, see the signs man it's all so numbin
All these tragedies and worldwide calamity
Humanity panicking scrambling man it's insanity
Memories is all we'll have and all we'll ever be
So when the curtain falls relax your soul and set it free"

Having been a consumer of Prozak's music for a while now, I don't mind that he kicked the rock quotient up a notch for songs like "Three, Two, One" - though those with a more traditional rap bent may prefer the speedy delivery of "Audio Barricade" and the folksy melody of "Fading Away." It's a testament to Prozak's skill how easily he transfers between seemingly disparate genres though while maintaining his gothic rap style flawlessly. There's not that much to complain about on "We All Fall Down," particularly given that producer 'Seven' Summers has once again matched Prozak track for track for the full 48 minutes. From the lush piano and melody layering of "Time" to the eerie harmonizing of "Nowhere to Run" and intense growl of "Vendetta," the tracks match the mood Pro was looking for each time out. His fans should line up now to get this one when it drops on September 17th.