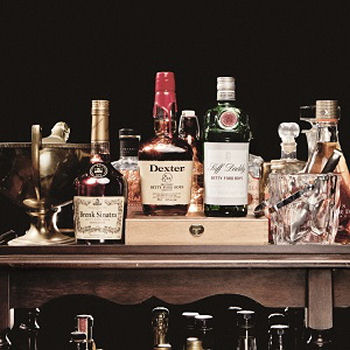 Like practically everywhere else, the rap scene in Germany has largely abandoned sample-based beats in the new millennium. As of late, however, there's been something of a crate digging renaissance, for which Melting Pot Music has served as a major hub. The Cologne-based label that celebrated its tenth anniversary in 2012 maintains the beatmaker platform "Hi-Hat Club" (six volumes and counting) and hosts a yearly event for beat enthusiasts called Beat BBQ. Brenk Sinatra, Dexter and Suff Daddy are all members of MPM's Hi-Hat Club, and together they form, as the label puts it, the 'first hip-hop producer supergroup out of Germany'. They all have careers outside of instrumental hip-hop. Austria's Brenk Sinatra is the group's veteran hip-hop head, scoring his most high-profile gig recently with his work for L.A. legend MC Eiht. Dexter was unexpectedly part of the chart success of German pop rap sensation Cro last year, only to tackle a full-length homage to '60s psychedelic/prog rock with "The Trip" this year. Suff Daddy was spotted remixing rap favorites, but also enjoys working with leftfield vocalists such as Miles Bonny and Fleur Earth.

The Betty Ford Boys seem to share not just an addiction for organic grooves but one for organic intoxicants as well. Vocal samples and song titles support the image projected by band and album name. The latter may be a pun on the '90s East Coast crew that gave us Busta Rhymes, but there's a heavy West Coast bent to "Leaders of the Brew School." Imagine Oh No and The Alchemist deciding to give the Gangrene thing a rest and let the music do the talking - not before getting high on some less aggressive concoction than "Vodka & Ayahuasca." Or think of studio sessions between Madlib and Sounwave or between Jake One and Jelly Roll.

Two producers working together are in good company with the aforementioned Oh No and Alchemist or DJ Paul and Juicy J, Cool & Dre, The Neptunes, etc. but three seems to be a crowd. Obviously hip-hop has seen some famous production teams (from the Bomb Squad to Organized Noise), but when it comes to the fundamental challenge of making beats that can hold up as instrumentals, it's difficult to imagine how the duties are shared. The band's bio relates that due to Suff Daddy spending some time in Sydney, the recording process 'took place in the cloud.' Although that seems to complicate matters even more, it's obvious that each producer left his musical DNA in "Leaders of the Brew School." The sketchy, airy bounce that permeates the entire album should be Suff's handwriting, the hard-hitting but subtly arranged rhythm sections sound like Brenk's, and the surreal touches can be traced back to Dexter.

One thing is clear, they decided "The Time Has Come (4 Us to Be One)," using a soulfully vibing background topped by boisterous D.O.C. snippets from "It's Funky Enough" for the opener. Older European listeners might recognize Dr. Alban's voice in "Hero Heroin," a seemingly themed track that for some strange reason features a random break with a Lil Eazy-E quote telling you to "drop that ass like a six-fo'." At least they've established that you're not going to hear the usual boom bap/beat project suspects. Any arrangement that puts Lauryn Hill next to Bushwick Bill gets props.

Anyhow, on an instrumental platter the vocal samples are the side order, the music is the main course. "Icky" is that hypnotizing headnod shit, a stuttering organ serving as a bassline while short echoing sounds give you flashes of the West Coast's musical spectrum. "Papa Was (A Junky), Too" wraps a serious topic up in the sweetest sounds you could elicit from a piano. Suff Daddy breaks out his Minimoog to accompany the Godzilla-sized rhythm section of "Tell Her."

"Hold Up" gathers three quintessential West Coast voices (Dr. Dre, DJ Quik, B-Real) under a starlit firmament. "I Need a 40" and "Till the Wheels Fall Off" show off the West Coast's clamorous side, while the strictly instrumental "Sippin'" and "Coco Puffs" offer a break from the agitation. "Westcoast Shizznit" is too much of an excercise in said shitzznit, while the trip down south that "Making Love Good" takes is a more original appropriation thanks to the inclusion of down home samples. By now the listener will also have noticed the Detroit influence that is present as well, as for instance heard in the bumping drums and moody melodies of "Everyday." Finally, offerings like "Snow Soul" and "Drinkin' Hennessy" point to the subdued and subtle manner of a lot of rap and hip-hop these days.

While most tracks on "Leaders of the Brew School" are an individual success, it's the sum that is most laudable. The Betty Ford Boys have created a very cohesive affair that flows largely uninterruptedly. These are 40 minutes you'll likely play front to back. Still there's plenty of variation between the basic premise of combining contemporary instrumental hip-hop with older standards. Don't expect too much beyond that, but you'll definitely have a nice evening in the company of these three beat freaks and lots and lots of smokes and spirits.