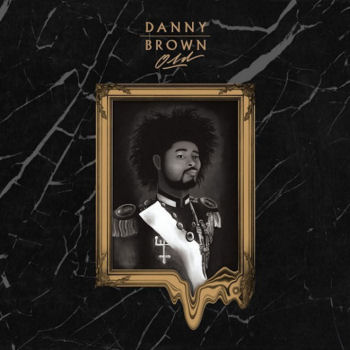 There have always been two sides to Detroit rapper Danny Brown. On one hand, he's a hipster wild man who spends his time guzzling drugs, screwing groupies, and rapping with a deranged flow. On the other hand, there is the street kid who grew up poor in Detroit, had parents that struggled with addiction, dealt drugs to crackheads, and realizes that he is on a dangerous trajectory. Both "The Hybrid" and "XXX" balanced songs about partying with more serious examinations of addiction and poverty. On his latest album, "Old," he goes as far as splitting those two sides of himself into two distinct album sides, each with their own sound and themes.

Brown makes an interesting sequencing choice by starting off with the serious songs and saving the party tracks for later. For the first half of the album he sounds somber and reserved, a weary OG tired of street life. "Side A (Old)" is about his transition from dope dealer to rapper, and most of the first ten tracks on the album follow a similar theme. Even the production is subdued, with Paul White and Oh No providing sample-based beats. Most of the songs are about the horrors of poverty. "Wonderbread," the first song in which he raps in his trademark high-pitched oddball flow, is about the junkies, prostitutes, and shootings he used to see on his way to buy bread with food stamps as a kid. "Torture" is about the debased situations Brown got into as a dope dealer.

He winds things down with "Clean Up," one of his most confessional songs to date:

"Daughter sending me messages saying 'Daddy, I miss you'
But in this condition I don't think she need to see me
Ain't slept in four days, and I'm smelling like seaweed
Problems in my past haunt my future and the present
Escaping from reality got me missing my blessings
Sent a couple G's but that make it no better
And now I got habits that ain't getting no better
And it ain't that easy trying to get all together
Been stressing so long think depression done settled
It's time for me to clean up
I came to far to fuck it up"

Then he spends the next ten songs not listening to his own advice. The second half of the album is all about partying. The sample-based beats are gone, replaced by a combination of bounce, trap, and EDM supplied by longtime collaborator SKYWLKR, dubstep producer Rustie, and Fools Gold founder A-Trak. "Side B (Dope Song)" starts off with a video game theme, as if Brown is acknowledging the cartoonish nature of his party persona. From there shit gets crazy. Rustie's beats sounds like a rave version of the theme to "Psycho," and feels like an exhilaratingly terrifying drug trip. It's as if Brown said "You want crazy? I'll give you CRAZY." and decided to get completely unhinged. It's also his goodbye to rapping about dealing, and fires some shots at rappers like Pusha T and Rick Ross who keep rapping about moving keys a decade into their careers:

"Dip" layers "Knight Rider" synths over a bounce beat in a song that celebrates ecstasy by describing just how unpleasant molly can be:

"I just bought me a water bottle
Chug that down but I think I need some more
And I keep feeling like I'm going to faint, but fuck that nigga
Pass me that drank
I done drunk too much I might throw up in the bathroom sink
Bitch I'm wilding
I'm zooted
I can't believe that I'm even moving
Off a half a gram of molly
We about to go party
And I don't know what I'm doing"

"Break It (Go)," "Handstand," and "Way Up Here" keep up the feverish, druggy energy. The songs are equal parts Southern strip club rap and B-more bounce, with Brown and guests Scrufizzer and Ab-Soul keeping the crowds grinding their teeth with their aggro rhymes. Party rap is a dimebag a dozen, but Brown brings an edge to it that you don't often hear. He's not just celebrating how fun it is to get wasted; he also describes the less pleasant effects of drugs, and raps like he is on the edge of freaking out. He's not just smoking weed, he's smoking himself into a "Kush Coma:"

The album ends with the hangover song "Float On," where Brown is praying he gets old. I hope Brown gets old, too. He's like a rap John Belushi, the party guy that everyone wants to get high with despite the fact that his party lifestyle is killing him. Brown's self-awareness of his situation doesn't seem to have made him alter his intake. At least it has allowed him to make an incredible album.