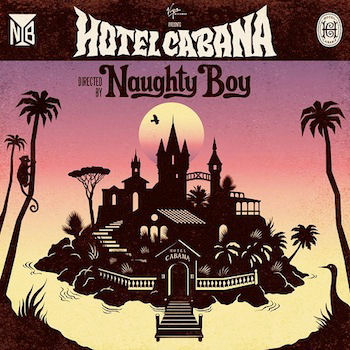 UK Month continues with the debut album of Shahid Khan a/k/a Naughty Boy, though "debut" is a very loose term here. Naughty Boy has actually been recording and producing dating back to 2005, although it wasn't until he laced tracks for Chipmunk and Wiley that he was propelled into the musical spotlight. Prior to that his biggest claim to fame had been winning 44,000 pounds on the TV game show "Deal or No Deal," and to Naughty Boy's credit he invested those winnings into his fledgling music career - a decision which certainly seems to have paid off. His good fortune has in turn propelled friend and singer Emeli Sande from relative unknown to darling of the UK scene. American audiences who don't know the name would remember her singing at the opening and closing of the 2012 Olympics.

Back to Naughty Boy though - the "debut" here is the first album Khan has done for himself, featuring his own production throughout, as opposed to crafting hits for other popular UK artist. "Hotel Cabana" is meant to be a clever theme alluding to the "guests" who "stay" for a while on his album, but it's a theme you can quickly discard. It's better to think of this as a compilation album along the lines of Pete Rock, where Naughty Boy handpicks his favorite artist to perform over his beats. One significant difference is obvious though from the hit single "La La La" - Sam Smith is not an emcee. It's hard to deny the infectious childlike hook NB's chosen producer Komi creates with the sample that reflects the song's title, nor the clean and upbeat drums that shuffle in the background. The song may not yet be huge in the United States, but it won't be long before it is.

Naughty Boy's collaboration with Wiz Khalifa on "Think About It" suggests he does have international crossover ambitions, and the song is strong enough that Khalifa might want to get permission to reissue it as a bonus track on one of his own albums. In fact Naughty Boy's beats and Ella Eyre's singing add a freshness to Khalifa's raps he should keep in mind for future songs going forward. Most of Naughty Boy's collaborators are better known in Europe, although a few such as Ed Sheeran ("Top Floor") have made inroads in the States. Others such as Gabrielle ("Hollywood") are true pop stars regardless of their mainstream exposure here. She has a sultry smoky voice that to me mixes Lena Horne and Billie Holiday. For direct links to hip-hop, you'll have to look to Mic Righteous on "One Way," Wretch 32 on "Pluto" and Wiley on the updated version of "Never Be Your Woman." As Naughty Boy achieved his fame working with hip-hop artists and hasn't abandoned those roots entirely on "Hotel Cabana," this was a worthwhile investment of time for our UK hip-hop month. I want to be perfectly clear though that "Hotel Cabana" is more of a pop album than a rap album - there's an undercurrent of hip-hop attitude but the predominant forces at work here are pop and R&B music. If you're a head who wants to hear a Naughty Boy rap compilation, you'll have to wait for another CD or check out his work on the next Wiley album. And while I'm not a huge fan of pop music in general, I think I'd feel the same way if Wyclef Jean produced a pop-crossover album - it's not hip-hop but I don't hate listening to it. Until they decide to release it stateside though, the $20+ entry price for an import will cause many people reading this to think twice.