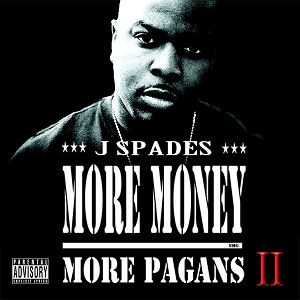 Contrary to what the title of his mixtape might suggest, J Spades doesn't spread the gospel. Maybe we'd have to go back to the first installment of "More Money More Pagans" to find out what makes a 'pagan' in Spades' world, but my educated guess would be that it refers to distractors and opponents, the religiously tinged term actually harkening back to a precursor of the ever popular 'hater' - the 'non-believer.' Either way it proves the East Londoner tries to add a bit of his own flavor to familiar formulas. And familiar they should be, at least if your playlist includes the likes of YMCMB, Lex Luger, A$AP Rocky, Waka Flocka and Young Chop. In short, it's the 50 Cent template we've heard so often in the past ten years, rejuvenated with a few newer trends and tropes.

In fact "More Money More Pagans II" manages to sound up-to-date, the soundscape being filtered through various grey shades and purple drapes. The apocalyptic "3000" does justice to the Waka Flocka feature on the hook, "Big up My Connect" is a dark southern trap track, "Feeling It" is likely a borrowed beat from either one of these newly emerged rap goths while "Rap Game" is an only slightly retooled track off "Live.Love.A$AP." "Wavey", an original CeeFigz production, sounds exactly like it should, a simple hypnotizing synth pattern hovering in mid-air. Steel Banglez is equally talented at mimicking modern beat patterns, "Over Here" sounding almost like a showcase of different trap variations. The Beat Boss is responsible for the musically lighter moments - "Bad Bitch," "Hot Gyal" and particularly "#TGIF," the commercially most promising song (co-produced with CeeFigz) with a welcome cameo from the ever-clever Sway.

Coincidentally or not, two tracks include samples made famous (to a rap audience, at least) by Jay-Z records. "Sidemans" actually seems to sample directly from "Imaginary Player," but either way it's a good example of J Spades' solid rap skills as he addresses some variation of these 'pagans' in a conversational but still fairly convincing tone:

"See you in the dance, now dey quick to shake your hand
and smile up in your face but dem man dey got snakey plans
Wait for you to flop so dey can try and take your fans
But when me and dem chat, I don't hear none of that
All I hear is, 'Spades when we jumpin' on a track?
You been gone for a minute dog, when ya comin' back?'
Dem man dey ring my phone but me I never holla back
I rather tweet my real fans gettin' my follow back
Real ghetto youth, puttin' London on the map
Went from trappin' hard, me and Juicy up in Bournemouth
to me and Dappy smokin' on the tourbus, four gal and four of us
Dem gal dem singin' like a chorus, ya can't ignore us
I ain't no funny dun, you know the ends that I'm comin' from
I ain't signed a deal, so you know where I get my money from
Street money that I made from road
Plus this big-faced Roley's only two months old
So I guess I'm in a league that these fools don't know
Now they prayin' that this fool don't blow"

J Spades operates with music and language imported from overseas. He does this quite well, and when you hear him take on the classic "Mind Playing Tricks on Me" instrumental ("Live Life"), even if it's in inferior YouTube quality, he sounds (minus the accent, obviously) as gangsta as any Houston rapper. Too often, however, the pure Americanness of his approach prevents the listener from getting a clearer view of the artist. He hits every damn cliché when he's actually more clever than that, his barbs possessing bite ("Trapping Look Bad"), his bad humor being tempered by good nature. In the end "MMMP2" is a typically overloaded and overstated tape you'll quickly familiarize yourself with but will soon sound a little bit too familiar.