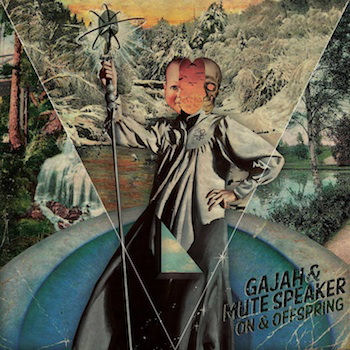 Long time Los Angeles rapper Gajah, best known to many of you for his work with the Acid Reign crew, breaks out on a bit of a solo mission here for "On & Off Spring." He's linked up over a long distance for the Brighton based Mute Speaker to produce his tracks. I don't mean L.A. to New York as in Brighton Beach - I mean L.A. to the southern shores of the United Kingdom. This makes the album a perfect candidate for our UK Month here at RapReviews, an annual October tradition of examining the best beats and rhymes our Queen's English (or cockney slanglish) speaking brethern have to offer. It's a sometimes overlooked scene in the States, and guilty as charged I have to admit I've overlooked Mute Speaker until now. He's got a Bandcamp page though I'll have to explore further at a later date.

Gajah has a naturally California sensibility to his laid back delivery, a Project Blowidian and Hieroglyphical approach to his "On & Off" beat delivery. He's also unapologetically nice - so much so he should probably remind you that kindness shouldn't be mistaken for weakness. "Enough Is Enough" exemplifies that right down to his choice of curse words, when the strongest adjective he'll use is "caca" - as in "you talk a lot of caca, but your words don't bother Gajah." There doesn't seem to be a mean bone in his body, but it doesn't make him a weak emcee. In fact he frequently reminds me of Chali 2na both in terms of his vocal tone and how quickly and nimbly he is able to spit similar syllables in succession. Combined with Mute Speaker's beats this leads to uniquely mesmerizing songs like "Peace of My Mind" featuring Shaunise, which shuffles and rocks bells at a pleasant clip. Shaunise's soulful singing is the perfect break between verses. Gajah seems unleashed by partnering with Mute Speaker - not that Acid Reign was a bad fit for him in any way, but that his lyrical wit comes through when he gets to dominate the spotlight. Little gems on songs like "Party Animals" stick out, from odd phrases like "come hither" to lines like "the place is jumpin and jivin like jackrabbits in heat" and "we get it funky like skunk spray" which both amuse me and show his commitment to keeping the song's theme throughout the verses. There are only a few opportunities for collabo on the 14 tracks of "On & Offspring," but he carefully chooses like-minded underground artists for each of them - Ceschi & Tommy V on "Kids These Days" and Open Mike Eagle on "In Between Time" for example. That keeps his carefully cultivated vibe with Mute Speaker in tact throughout. "What's our purpose on this Earth? Even God don't got a clue
Cause it's not about destiny or luck, it's about you"

Every now and then those profound moments from Gajah really reach out and grab me through this album. Mute Speaker is to be commended here for providing a subtle but effective backdrop to embellish Gajah as an emcee, who tends to speak in a quiet but firm way, instead of providing overly boisterous beats and boom bap that could drown out his vocals or kill the vibe. It's not "minimalism" per se, but it's definitely respectful of the aesthetic, and it suits Gajah to the point I hope they continue to collaborate going forward. Mute Speaker has given me a new appreciation of Gajah as an emcee outside his Acid Reign family, and if you give "On & Off Spring" a chance you may find the same is true for you as well.