Smiler :: The Coming :: The Portfolio Music
as reviewed by Matt Jost 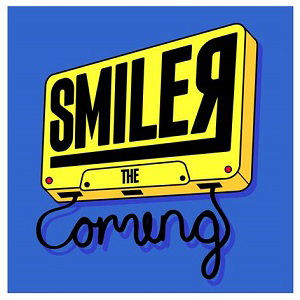 It's him again. The talented mixtape spitter on the verge of his major label debut. UK delegate Smiler is signed to Warner and already made his official single debut, but drops the free "The Coming" in anticipation of the retail release. He has prepared a couple of ear-catching moments that play with your familiarity with famous tunes, but kicks things off with a marathon verse on the opener and title track. Introduced by a piano somewhere between pop and classical, then accompanied by a combo of stuttering drums and slicing synths, he brings us up to speed with his career with a matching fast-paced flow. Zooming in, we notice his ability to weave a web of arguments:

"I was in awe when the olders came
And they showed me ropes to the game
And they showed the closing of ropes and the chains
And they told me: 'So J, don't play
Regardless, you don't tell
And you don't take when it don't sell
I swear, you keep this code in your brain
You'll fly on the road to the dough and the change'
Same ones makin' the statements
Well, they all changed
Now a nigga's blazin' caine in the basement
of a twelve-floor maisonette
or crushed in the subway singin' Elvis
and a sign post sayin' 'HELP'
Wouldn't make it if a man [didn't put] change in their basin
It's sad but amazin'"

Listening to Smiler can be an intense experience, and the South London rapper is mindful enough to make it easier for us through guest rappers and singers and catchy concepts. There's a spiritual note to "Head Above Water," not just due to the wailing vocals that are present throughout the track, but the almost meditation-like focus Smiler and Giggs display in their performances, Smiler's youthful passion meshing well with Giggs' seen-it-all demeanor, the contrast supported by a beat switch during Giggs' part. Conversely, guests Blade Brown and Black The Ripper follow Smiler's lead on the mellow Nina Simone-sampling "New Day" (no relation to the "Watch the Throne" track of the same name) with reflective contributions. Not content with following old rap conventions, Smiler invites singer Folly Rae for the modern indie dance-inspired "Lights," which concludes a project that is never crude or grating musically.

Some of his musical maneuvers are admittedly a bit on the risky side. He adds a superficial shine to Amy Winehouse's "You Know I'm No Good" with the bragfest "So Good" and turns Daft Punk's summer smash "Get Lucky" into "Get Money." Yet both renditions are carefully put into a familiar hip-hop context, betraying Smiler's sensibilities towards the craft and the genre. Remaining doubts about Smiler's song interpretations are dispelled by "Chocolate Monsters," his version of "Swimming Pools," which replaces alcohol with heroin, an eerie experience both because of the topic matter and how well Smiler imitates Kendrick Lamar.

"Streets of London" evokes an original song as well, and the sheer professionality of it raises the question if he's beat-jacking again, obviously not the Ralph McTell original, but someone else's contemporary version of it. Either way the inclusion of a children choir and a female singer constitutes a considerable effort for a free song - but one well worth it. Too bad we can't give production credits where credit would certainly be due. The only track that discloses its composer is "Back Again," an atmospheric, intimate pop-hop production courtesy of Efexx.

"I blended the roads with the charts and I called it mainderground," Smiler offers on the title track. At this point that reads more like a promise than a plain fact. He's still in the process of, as he says on a later song, making the industry "imagine what Smiler could be to the market." But even if "The Coming" is only "the calm before the inevitable storm" (and the sequencing prevents it from reaching near perfection), it's a triumph. Here we have a highly precise and very present MC, combining skill, intelligence and emotion the way Lupe Fiasco or J. Cole did (even evoking their inspiration Nas at times) and our only hope is that eventually Smiler can establish himself as an official UK rap representative in that mold.