Ghostpoet :: Some Say I So I Say Light

:: Play It Again Sam
as reviewed by Patrick Taylor 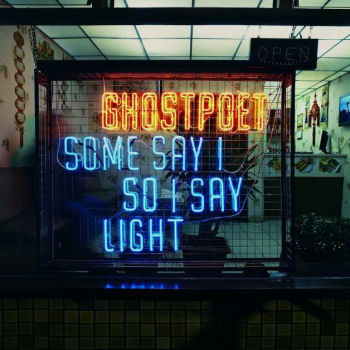 "Some Say I So I Say Light" is the second album by British artist Obaro Ejimiwe, who performs as Ghostpoet. His first album, 2011's "Peanut Butter Blues & Melancholy Jam", was nominated for a Mercury Prize. As with his debut, Ghostpoet's sophomore release sees him straddling the line between electronic music, hip-hop, R&B, bedroom folk, and ambient music.

The album opens with "Cold Win," a song about trying to escape the drudgery of everyday life. The music is ominous, catching the oppressive feeling of facing another day commuting to a dead end job. At the chorus, Ghostpoet sings:

"Can someone show me the way?
I don't know this place
I rose awake in a dream
I need to go back before the sun goes down on my heart"

This sense of existential dread is repeated throughout the album. On "Them Waters," he complains that of being "Mind stuck in cubicle," and sings:

On "Dial Tones," he complains "Nothing seems to satisfy/taste in my mouth/Like bitter old tea." For someone who has received a fair amount of critical acclaim, he sure seems bummed out.

The album works best when his depressive lyrics are paired with dynamic music. The jazzy guitar on "Plastic Bag Brain" gives life to a song that is full of ennui and self-doubt. The stuttering keyboards on "Them Waters" give the track both a sense of menace and some kick. That kick is essential, given Ghostpoets gloomy lyrics and sleepy delivery.

Unfortunately, the last half of the album gets bogged down in its own navel-gazing. "Sloth Trot," "MSI musmID," "12 Deaf" and "Comatose" get drowned in their own morass, never really congealing into songs. At best it could be ambient background noise, but the music is too unsettling for it to even function as chillout music.

The closest contemporary comparison you could make to Ghostpoet's music would be James Blake, who likewise makes close, intimate music that exists somewhere between electronic music and R&B. The one big difference between Ghostpoet and James Blake is that Blake does a better job of writing actual songs. Even at his most abstract and quiet, Blake has melodies you can hang on to. Too much of "Some Say…" feels formless, like an idea that is percolating but not quite there.

"Some Say I So I Say Light" is a continuation of "Peanut Butter Blues and Melancholy Jam's" sleepy sound. It's unfortunate that Ghostpoet hasn't honed his songwriting in the three years since his debut. While there are some good songs on "Some Say…," it is often a frustrating listen, which is all the more disappointing given Ghostpoet's potential as an artist.