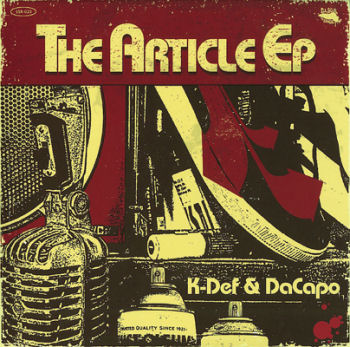 Originally advertised in 2008, "The Article" has finally been released. Not under the original guise of The Program, but under the featured artists names – K-Def and DaCapo. K-Def has been around for a minute, having helped produce the self-titled Lords of the Underground album with Marley Marl, as well as providing tracks for Ghostface Killah, P Diddy and even UGK. "The Article" is certainly more along the lines of the Lords' record in terms of how it involves horns and maintains a raw, yet fun mood throughout.

If you've ever enjoyed a Jurassic 5 record, tracks like "The Article" and "Free Speech" are examples of why Chali 2na and friends are still missed. "The Article" is full of sticky bass, sharp snares and precise rhyming, but it is the light-hearted, borderline corny vocal sample that ties things together. "Free Speech" is definitely more of a homage to the artists that came before K-Def and DaCapo, with a hook containing numerous legends, most prominently Flava Flav simply saying "check this out". DaCapo himself sounds like a toned down El Da Sensei, with a hint of O.C. in his diction. He doesn't provide any moments of spectacular storytelling or memorable wordplay, but is solid throughout the record.

He is sort of just there on "Daydreamin'", but then flourishes on "Fallen", eulogising numerous deceased rap and soul artists. He manages to add some surprisingly honest admissions, primarily one that sees him admitting to never following Big L when he was alive, and regretting it. But it is this air of authenticity that lends him instant gratification, taking this further on "Gotta Get Da Cash". There are two versions of this song on "The Article"; the EP mix and the Original mix. Both see DaCapo talk about his need for cash, but that he doesn't want to sacrifice his soul for the art whilst earning it. The EP mix is distinctly Buckwild-like, feeling like some straight up DITC shit, sleigh bells and all. The Original mix however, is a real neck-shredder, and by far the best production on the record – if you don't feel this song straight off the bat, you best do a Kool Moe Dee and go see the doctor. The way K-Def flips the production from the feel of a laid-back, cypher session on the EP Mix to the horn-fuelled head-slam-aganza is the sign of a versatile beat-smith. Adding in the instrumental (along with all the others) adds replay value for any budding remixers out there too, whether you're a proper DJ that mixes vinyl, or a wannabe that wastes hours on the likes of Audacity and Audition lining up some classic acapellas.

"Beggin' Street" is the one track that gets shoved aside amongst the other more prominent productions. It suffers from a repetitive sample on the hook and a beat that doesn't just plod, but drags its feet. "Life Goes On" is chirpier, and I think Beanie Sigel would do well to jump on some K-Def production because it sounds like something off his early Roc-A-Fella albums. There are 4 bonus songs included before the instrumentals take over; "Genius", "Cap-tion", "She Got Away" and "Psychosis". All are worth your time but I feel "Psychosis" will grab most of the replay value, again because of K-Def's ability to simply manufacture a fucking dope ass beat.

"The Article" starts off well, but isn't quite the finished article by the time you head in to the bonus tracks. DaCapo doesn't necessarily hold the record back from greatness, but also doesn't really provide anything extra special due to sounding A LOT like a more emotional El Da Sensei. K-Def however, must be one of the most underrated producers out there, providing that rare ability to craft classic hip hop era production without coming off as another copycat. DaCapo does his thing but K-Def really is the star of the show here, and perhaps with some stronger rhyming, the two of them could provide that rare achievement of timeless hip hop on their next collaboration. Then they really would be "The Article".