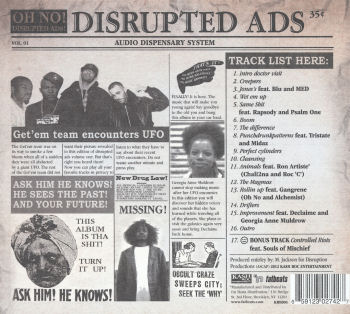 After the thumping Gangrene collaborations with Alchemist, Oh No proves that while his name may not ring bells quite as much as the self-proclaimed rapper's best friend, Oh No is more than worthy of his status as production extraordinaire. He is a producer who you may well have already heard, having worked on video game soundtracks, from the ultra-hardcore fighter BlazBlue to scoring the ultra-popular Grand Theft Auto 5.

Proof of Oh No's abilities can be heard throughout "Disrupted Ads", a concise mix of instrumental segments and rampant, horn-heavy tracks. Much of the album feels like listening to the radio; well, not THE radio but the structure is of that ilk. Tracks such as "Boom" emit a possessed style, as if the music equipment came to life, became out of control and threw the engineer against a brick wall.

"Punchdrunkpatternz" feels like a European movie thriller, while "Perfect Cylinders" is on some Italian cathedral vibe. It's no wonder Oh No has caught the interest of video game companies as his music truly does take you somewhere. Retro adverts rear their well-worn heads on "The Difference" (reminiscent of DJ Yoda's mixtapes), with a more laid back instrumental that has enough about it to carry the listener's interest.

Where I find myself normally struggling to enjoy instrumental records, Oh No is able to bring together a variety of samples on "Disrupted Ads" that certainly feel disruptive when compared to other records released this year. The disruptiveness somehow works though, with weaker moments actually being the tracks featuring emcees: "Animals" sees Roc C and Chali 2na proclaim how animalistic they are, yet Chali's smooth tones just don't convince. Blu and MED lace "Jones's" with some suitably vivid rhymes but somebody, somewhere decided they should have an effect on their voices to add to the disruptive theme – as if they were calling in to the radio to record their rhymes. It falls in line with the premise of the album, but does mean the song loses some of its edge.

After 36 minutes, you'll be surprised how many times you'll want to come back to "Disrupted Ads" – I've been listening on and off since it came out back in January. As far as hip hop records go, this is a short but sweet one that will undoubtedly fall under many radars, but give it a chance and you'll be pleasantly surprised how enjoyable these ads are.