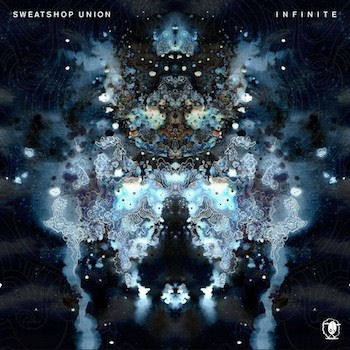 They've been called the Wu-Tang Clan of Canada, both here and on their Wikipedia page, but don't get Sweatshop Union twisted. The comparison implies their ability to come together like Voltron for one common cause, then go back to their solo identities and projects until needed. They're not trying to recreate the vibe of the early 1990's with dirty production, martial arts samples and slurry New York slang. Like much progressive hip-hop of the last 20 years though, S.U. owes a debt to the Wu-Tang for opening the floodgates to creativity, leaving the landscape of North America awash with talent inspired to be originals. The "Leisure Gang" sound and video definitely pays homage - this is some gritty and raw hip-hop music.

"Leisure" may seem like an odd word, given there's nothing relaxed or mellow other than the sentiment "I suggest y'all giving it a try/sitting getting high just listening to I." It's also filled with hilarious sentiments like "Come back as a skinny white Rick Ross, jumpin like Kris Kross." The video has the feel of being filmed in an Egyptian desert, so if they found a location in Vancouver that looked that barren and sparse, my hat's off to them. The video came out over a year ago, so "Infinite" has been in the works for a while now. It's definitely worth the wait, especially when you get to enjoy tracks like the Budo produced "Family Reunion." "Soul of the continent, rebirth of common sense
Redirect energy, we reflect God within
Most of y'all forgotten them, trust me this is not the end
I was promised victory, before it's done I got to win
Momma I'ma take it back, reconcile the sky and earth
They done disrespected you so long brought down a curse
Drought, famine, earthquakes, disease
Tsunamis and they STILL callin you make believe?"

Yes Sweatshop Union is a little bit on that hippie shit, but only if that "hip" still includes "hip-hop." They don't go all the way to tofu and granola, but it's an undercurrent. It's not one that should cause you to be wary if you're a meat eater, because their eclectic nature is best reflect by songs like "Space Bears": "Space age Tupac, hair like Chewbacca/time travel in the house, coat and tube socks/tie dye t-shirt, astronaut head dress/superhuman, superpowered y'all yes yes." It's tongue in cheek, tongue pointing firmly toward their group aesthetic, and they only commune to communicate collectively in producing and releasing dope albums like this.

"Dope" is the key to "Infinite" because you can get high on it without taking a toke. All of the NBSBL College produced songs are dope but light up "Feed" featuring Def 3 and Snak the Ripper for a start - it's some straight up Swollen Members shit as is "King of the Beach." At times you may wonder why Madchild isn't making a cameo. Guest appearances are limited though, which you'd expect given they are such a large crew to begin with, so the only other feature to mention is "Listen Up" featuring Claire Mortifee. S.U.'s Pigeon Hole does a few tracks on his own such as the aforementioned "Space Bears" and "Leisure Gang," and his tracks are dope too. From the slow and methodically delivered pianos of "Time Granted" to the bubbling electronic sounds of "We Ready," S.U. flows freely over any style they're paired with, making the title of "Infinite" apt. They don't seem to have any limitations nor are they likely to find any in the near future.