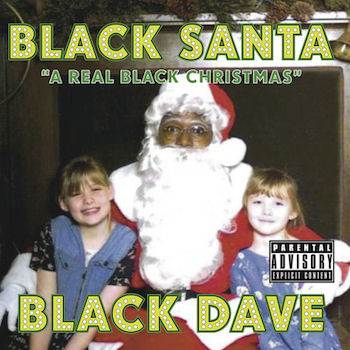 Black Dave is an enigmatic figure of the underground rap scene who once summed up his entire style in five words: "I rap and I skate." That self-description is inevitably going to draw comparisons to Lil Wayne, but Black Dave hails from New York City and not New Orleans. One has to feel the two would hit it off though when listening to the song "Don't Be Mad":

"Black Santa Claus is the definition of swag
And I'm payin child support and I ain't even your dad
Ha! You a son to me
Need help on a verse? Nigga you run to me
I got my gun with me, so if you want the beef
Sit your ass front row like Spike Lee"

Even though be brags that he's a "New York City skater living out (my) dreams" on the track, he takes a time out from dreaming for a little bit to drop the "Black Santa's Real Black Christmas" album. Don't get this confused with good tidings of the holiday season or joyous caroling though. Even Eazy-E may have had more cheer when he said "Merry motherfucking Christmas, and have a fucked up, new year!" For example I wouldn't play Black Dave's "Rudolph" at your holiday office party, unless everybody is so drunk on spiked eggnog they'll forget it later. It starts out sounding like the classic ode to Santa's red nosed sleigh puller, but quickly takes a very dark turn and becomes an ode to a snitch.

"So it's, Rudolph, a real quiet kid
Never thought he'd up on that lyin shit
Quick to tell another word to them New York pigs
And never thought a second twice about the time they did
So just to, keep it basic, them goons found a placement
And found that nigga quick cause there was no time wasted
Tie that nigga up right in his grandma's basement
Put the gun to his head so he can see what he was facin"

It's not that Black Dave is a bitter green Dr. Seuss creation who wants to ruin Christmas though - he's just using the holiday theme as a chance to share some reality stories from around his way. He clearly wants to have a good laugh - product of the environment or not. The issue of whether or not a black man in a Santa suit gets accepted as the "real Santa" has already been addressed on The Boondocks so for Dave "Black Santa" isn't a political statement.

Dave may have bigger balls than the Christmas ornaments he raps in front of in this video, especially for making a "knock you out the park like my name was Mickey Mantle" reference. Mantle's run as a New York Yankee was before I was born, and I'm not exactly a young cat, so maybe he's a sports historian besides being a rapper and a skater. I appreciate it. "I ain't a fuckin thief, but I gotta keep it real/They had a lot of shit, so a nigga had to steal." It's ultimately a reverse Santa fantasy, complete with a mom who catches him in the act, and she has "a big fat ass and a nice pair of titties B." At the end of the day, Dave's just having fun.

Given the songs the album jacks from, like Mariah Carey's "All I Want for Christmas Is You," there's little chance that Black Dave could have released this album commercially - and that's just fine. This is Dave's gift to his fans. From his pledge to sex up females on "Tell Me (What U Want For Christmas)" to his keyed up drinking and smoking on "Gangsta Christmas," there's a lot of partying and conspicuous consumption. Given the commercialized nature of Christmas, it's highly appropriate. "You tryin to block my shine, but you some Grinches/This is how we ride on a Gangsta Christmas." A few lumps of coal have to be handed out for "Christmas Everyday (Mistletoe)" though - the singing doesn't suit Dave. It's also fair to note Dave's lack of depth is easy to put aside on a 9 track album with a holiday theme, but you can only say the same things about drinking, fucking, smoking and skating so many times. This time since it's a freebie he gets a pass, so Merry Christmas Dave, and don't have a fucked up new year!