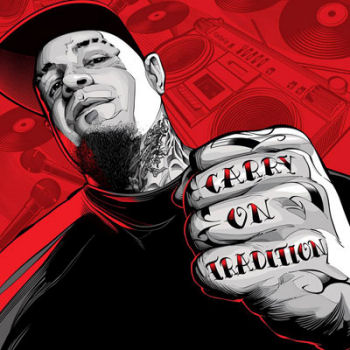 Ten years ago, I was a huge fan of Vinnie Paz - namely his work on Jedi Mind Tricks' cult classic "Violent By Design" which was a brilliant combination of geeks and gangsters. Unbeknownst to many at the time of release, "Violent By Design" turned out to be a transition record for Vinnie, throwing together enough historical references and abuse of a thesaurus to satisfy fans of the ridiculously wordy "The Psycho-Social, Chemical, Biological & Electro-Magnetic Manipulation of Human Consciousness", but introducing a dirtier, ultra-violent side to Stoupe's production. It also saw a brutal partnership form with Jus Allah, an emcee who'd make Sticky Fingaz blush with wild statements. The demo-like recordings of the first Jedi Mind Tricks album were replaced by a wider array of samples and guests, planting the seed for what would become the Army of the Pharaohs movement.

As much as I get a kick out of that hardcore, East Coast boom bap style, I've always enjoyed Jedi Mind Tricks albums because of their overly brutal approach to murder. The likes of "Legacy of Blood" and "Servants in Heaven, Kings in Hell" contained statements so ridiculous you just had to laugh. Examples such as "I'm a mothafuckin baboon, Hit you with thirty-seven stab wounds" and "My fuckin' soul is dark, I wouldn't wish it on you, I wouldn't wish any of my mental conditions on you" , were partly why their earlier work was so enjoyable. Admittedly, since Stoupe departed after the underwhelming "A History of Violence", Vinnie has struggled to add anything on a similar level to his catalogue. While he is still talented enough to write genuinely moving songs like "Same Story" and "Bad Day" - two of the better songs from "God of the Serengeti" - much of his output has been standard ratchet rap proclaiming his infatuation with guns.

As monotonous as Vinnie can be, his delivery has always been a pleasant one despite sounding like a sufferer of a severe throat infection. His presence is undeniable, and with "Carry on Tradition" he has lessened his mic time to try and put on some upcoming emcees that also get off on death and violence. Vinnie certainly carries on tradition with the opener "God Bless", a raucous track full of intimidation and aggression that is helped by a Mikey Bingo production. The vocal loop used here is reminiscent of Jedi Mind Tricks' work, and is devoid of the monotonous, heavy-handed approach that unfortunately is evident throughout much of this album. OK, so it's billed as an EP but this is eight tracks deep and I'll treat it as another entry in Vinnie's endless canon of brutality either way. While the infatuation with violence becomes more and more tedious with each release from Vinnie, he sounds incredible next to some of the guests featured. Songs like "Bleed For Me" are a waste of Blacastan's talents, drowning out his storytelling abilities with an overblown instrumental. Chris Rivers throws words at the listener on "No More Games" in such an aggressive, relentless rate that they fail to register, and in turn fail to impress in the same way his father Big Punisher did so well. Where the emcees falter, the guest vocalists most definitely deliver.

Vinnie deserves props for including an array of singing talent on "Carry on Tradition," as much of this sub-genre of hardcore hip hop is overloaded with DJs scratching worn-out lines from 20-year old records. The magnum opus that closes the record is "Is Happiness Just A Word", a typically depressive name for a remarkably catchy, accessible song that follows the likes of "Keep Movin' On" and "Razorblade Salvation" in how it combines Vinnie's emotional side with some stonking female vocals. Scott Stallone proves the men can be equally adept at providing a mellow Ying to Paz's brooding Yang, enhancing "Envy the Dead" with a quality not too unlike that of the best West Coast gangsta rap from Nate Dogg and Kokane. Through each of these strong moments though, "Carry on Tradition" is decidedly mixed, and there remains little sign of the creativity displayed in Vinnie's earlier work, and what with "Carry on Tradition" lacking the cinematic scope Stoupe provided, the only tradition being carried on here is more guns, more intimidation and more hollow production. He still puts sinister laughs in his adlibs, still rarely switches up his flow and takes his approach to rap even further in to death metal territory. Of course, Vinnie still maintains a strong following, but for anybody yet to be convinced of his vicious approach to hip hop, this isn't going to change that opinion.

Despite my reservations, there's enough here to warrant a listen, particularly the solo material ("God Bless", "Envy the Dead", "Is Happiness Just A Word"). The guests are mostly here to fill out the songs, but none steal the shine from Vinnie, even if much of his verses are lacklustre by his standard. Perhaps I preferred his creative fantasy world where he proclaimed to be Ishmael Lord of the Seas, or was so savage that he wrote rhymes in pitch blackness; the direction Vinnie's solo stuff has taken is severely lacking in regards to creativity, even if he does throw in heartfelt records like "Same Story" with each one. Overall the album/EP is decent for what it is, but carries on a tradition in Vinnie Paz records that needs to be broken by a bit more variety and dare I say it, humour.