Cory Mo :: Take It or Leave It 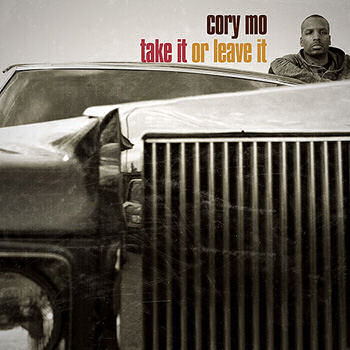 Although he has since relocated to Atlanta, Cory Moore keeps H-Town close to his heart. His finally available full-length debut, "Take it or Leave It," reflects the local rap scene's loyalty to black music of decades past, the album cover even re-enacting Donald Byrd's 1963 LP "A New Perspective." As a producer, Cory Mo's past clients include the Geto Boys, Devin the Dude, Z-Ro, Lil Keke, and of course Bun B and Pimp C - under whose tutelage he essentially came up. You could call him a latter-day DJ DMD, another composer-turned-vocalist from the UGK entourage - if D and C didn't share the same starting point back in '80s Port Arthur, while Cory Mo may have accompanied UKG for a substantial part of their career but started out as a protégé of Pimp C, rather than a peer.

Other than that (and despite the 15-year span between their albums) the comparison isn't that far off. Both DMD and C-Mo aren't natural born rappers but possess the clean-cut, confident flow of experienced producers. And they both prefer traditional musical patterns. Up for a challenge, Cory Mo raps over outside production for a number of songs, mainly from the duo of Beatnick & K-Salaam, likely recommended to him by the guy who puts out his record, none other than Talib Kweli, who by signing Cory Mo further explores his musical kinship with the 'country cousins' down south.

Kweli checks in on the sessions and insists to jump on "Hold Up," also featuring Big K.R.I.T. (who seems to channel Pimp C on this one) as Cory Mo comes up with a more contemporary southern beat. "I done been there, done that, bought the t-shirt / Just Sayin' - do some research," he quips up top (Just Sayin' being the name of his clothing line), making his mark before his nimbler tongued colleagues take over. Other big name guests include Bun and GLC over the thick-as-molasses groove of "Chose Me" (co-produced by young Houston producer Risky Boi and laced with nice Snoop scratches) and Devin, Daz and Chamillionaire over the relaxed bounce of "Please Listen Carefully," another explicitly pimpish tune with Devin singing the hook as if it was 1999 again and Chamillion reminding us of his sorely missed talent.

It's not always easy for a 'producer on the mic' to delegate production duties, but Beatnick & K-Salaam make it a little bit easier for Cory with tracks orchestrated like a full band was playing them. They turn up the thermostat to a temperature warm enough for the horns, drums, bass, organs, etc. to develop their characteristic sound. The outcome sometimes caters to southern tastes ("Take it or Leave It"), but it can also sound like something East Coast rappers would typically rap over ("It's All Over") - while always being essentially soul and funk, from the satin textures of "Ride With Me" and "Here 2 Party," to the duo's more modern interpretation of these genres, "Do What I Do." Meanwhile 9th Wonder underlines the universal appeal of his soulful sound with "Special Delivery," although his low ends still exit through a muffler.

"Do What I Do" leads the final trio of songs that provide the vocalists with new talking points. It sees Cory proposing marriage at song length with Raheem DeVaughn as best man, while on the closing "Live Your Life" he's assisted by Mya as he delivers real talk to those in the hustle and in the struggle. Sandwiched between, "Sometimes" is a reflective joint with noteworthy contributions from Starlito and Scotty ATL over a spheric Trakk Sounds production.

These are welcome additions to the Cory Mo repertoire after the songs that fit a traditional format almost too tightly. Still if you appreciate rap grounded in the asphalt that can do without the well-worn gangster/hustler attitude, you'll also enjoy offerings like "Take it or Leave It," "Hold Up" or "Special Delivery." There's a sincere, self-humbling side to Cory Mo the rapper, but he can put his foot down as well, see the self-produced slap "Still Gettin Better," where he's clearly in his element musically, giving up game to a funky grinding guitar:

"Bitch, you better respect yo elders
Respect the game that we gave ya cause we ain't have to tell ya
Cause anything is plenty, mayne, from where I came
South Texas, motherfucker, that's what I'ma claim
I'm gettin' better every time I write another rhyme
And every track I make, it got a funky bassline
I like my bitches thick with a thin waistline
I don't want her if she don't give good face time
If it ain't wood on the wheel I ain't gettin' in it
If ain't no leather on the seats I ain't sittin' in it
If it ain't drippin' candy paint it ain't a SLAB, fool
And you ain't trill if you ain't down with Pimp Chad, fool"

Cory Mo's official debut is anything but groundbreaking. Banking on swang rather than swag, he has created a bonafide old school Houston rap album, in accordance with the mottos "If it ain't broke don't fix it / Do what works for ya" ("It's All Over"). Besides the slowing and chopping on the second disc courtesy of Ron C, there are no fancy filters and effects here, but a lot of singing that blends perfectly into the musical background. Although background is probably the wrong word, the music naturally playing a very prominent part on such a record. Still the "UGK alumni" makes a full-circle statement consisting of beats and rhymes, the way a legit rap release should.