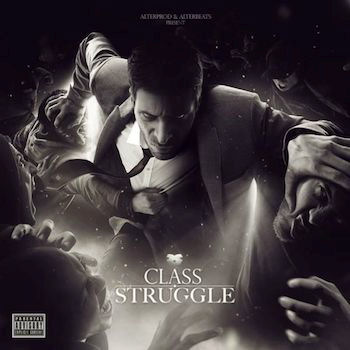 Alterbeats are back again. The label imprint, the cover art, even the organization of the tracklisting gave this reviewer a serious case of the appropriately French phrase deja vu. It refers to the feeling that one has already experienced the exact same thing once before, even if the experience itself is entirely brand new. Seeing guest stars like Carnage45, Main Flow, Bekay and Shabaam Sahdeeq only heightens this feeling. All of the players are the same, the producers are the same, AND YET this is a brand new album with new songs. It's a real mind trip.

"Stop It" will make listeners ask Alterbeats to skip the foreplay and get right to the fucking business of making a Shabaam Sahdeeq album. It's clear the two sides have chemistry and compliment each other, and after being overlooked and slept on for a couple of decades, Sahdeeq has nothing to lose by making a trans-Atlantic link-up. That's a familiar story for many of the artists though, including opening track rapper Verbal Kent on the song "Who's the Next?" He's one third of a group of Ugly Heroes who got a lot of nods for Best of 2013 yet still finds it necessary to explain who he is to listeners.

"I'm the illest on the mic - been yellin it!
Y'all are washed up - +Get a Life+, Chris Elliott
Know the name, hit you your face, misspelling it
P90X, y'all flex, tits feminine
Pipsqueak, kicked to mince meat, up against me
All I see is candy on a stack - sucker emcee!
Let's see, who's the next victim in my area?
Mouth muffled, stuffed in the duffel as my carry-on"

One gets the feeling that "Who's the Next?" would be great rap music to play CastleVania to - something I'm going to have to try myself. "Gothic" is just one of the styles that Alterbeats does well.They make broad and dark music which mixes the best parts of a variety of production techniques. You can hear the Kanye West in "Fruit Punch," a brutal bruising bash featuring Guilty Simpson and Rockness Monstah. You can hear the DJ Premier in Carnage 45's "The Overview," with multiple layers of symphonics and the cut 'n scratched hooks. You can hear Stoupe the Enemy of Mankind on "Real Talk" featuring Skeezo, and you can hear Lil Fame on "The Unit" featuring Neek the Exotic and Satchel Page.

What do all of these different producers who inspire the Alterbeats have in common? A reputation for high quality head nodding music. There's a consistency (and to be fair occasional monotony) to the high level of execution set on "The Class Struggle." For better or worse though the album itself struggles to have a breakout single, although "Stop It" comes the closest. Everybody involved from Mic Handz ("My Life") to Nutso ("From the Heart") deserves their chance to shine and gets it - but even one bad song would have made the others stand out that much more. When the worst thing you can say about an album though is that it's exceptionally well produced, it's worth your time to get a copy for your personal enjoyment. Bang this in your car.