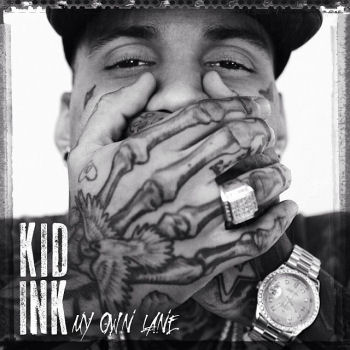 Everything goes in cycles, particularly in music. Fifteen years is a long time in hip hop, but it was that long ago that Ja Rule started taking over the airwaves with his gruff style of croon-rap that enabled him to save hiring vocalists for his radio singles. It was immensely popular, but then became unfashionable once 50 Cent was "chosen" to take hip hop forward - even though he ended up doing a similar thing with songs like "Candy Shop". You probably already know this, but I found it to be a useful reminder when fans complain about the abundance of rappers (led by Drake) that combine singing and rapping in their work.

"My Own Lane" kicks off with every programmer's favourite message, "Hello World" - a song that's so nearly devoid of Ink's hip hop roots, almost as if it's been programmed to the hilt in order to fit snugly in to any radio playlist. Where most rap albums will feature at least one song that caters to those who don't just listen to hip hop 24/7, Kid Ink's latest release feels like a whole album of them. Yet as much as I expected to hate this record, I don't. Kid Ink is not going to be mentioned in the same sentence (other than this one) as your Pharoahe Monchs and Eminems, but he is certainly listenable.

What sets Kid Ink back from really leaving a mark on the listener is the clear lack of character - this album is so safe in its execution that it feels like a smooth Chris Brown record rather than the first big hip hop release of 2014. It's no surprise to see Mr Brown feature on two songs with Kid Ink, the first being "Show Me" which has been released with a typically rebellious video set at a house-party inside a showhome. I say rebellious, I mean ‘a little bit naughty'. Chris also lends his vocal talents to "Main Chick", a worrying tale of fidelity that assures Kid Ink's lady of choice that she is ‘the main chick', despite admitting to not knowing her name. It's typical bad boy behaviour, and it is a theme that runs throughout this glossy, club-centric collection of party anthems. Even when Kid Ink teams up with mic mangler Pusha T, he drops corny lines like "you ready for this shit? get the tissue", and Pusha T (to his credit) doesn't hang around long after hearing such infantile remarks.

Where this album stands out is in its top notch production. DJ Mustard dominates with three of the best cuts ("Show Me", "Main Chick", "Rollin'") carrying on his momentum from 2013 nicely, with some of the poppier efforts being delivered by DZL and the consistently impressive Futuristics. If any album could be summed up by song titles, "My Own Lane" does exactly what it says on the tracklisting: "We Just Came To Party" is neatly nestled in between "Iz U Down" and "Main Chick", with "Tattoo of My Name" and "I Don't Care" bringing up the rear. This is rap music that bathes in its own self-indulgence yet somehow feels clean-cut when sat alongside fellow sex pests Drake and Juicy J. It's clearly aimed at the younger audience, and acts as a decent entrance to hip hop for any teenager that has been raised on EDM, but experienced fans will find this record too wishy-washy and ultimately hollow in nature. Kid Ink hasn't so much found his own lane, but taken the well-worn stretch of road that's littered with empty beer bottles and discarded condoms; a road frequented by beautiful video-models and catchy hooks. Despite this, "My Own Lane" is tasteful, smooth and if taken at face value, an enjoyable example of radio-friendly hip hop.