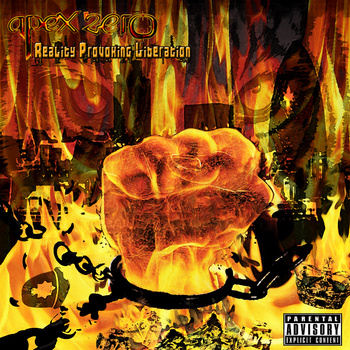 West London rapper/producer Apex Zero has described himself as a "Neo-hardcore Tru Skool Hip Hop Emcee." While this description is over-the-top and kind of ridiculous, it also gives you an idea of who this rapper is as an artist. On Apex Zero's debut album, "Reality Provoking Liberation" you have a rapper who is intensely serious, starkly political and altogether lacking in humor and personality. He credits the radically political emcee Immortal Technique as a big inspiration, and Apex Zero's music definitely reflects that. But I find Immortal Technique to be a total drag to listen to, so "Reality Provoking Liberation" is also not an enjoyable listen for me.

Apex Zero is a solid enough emcee; his vocal delivery sounds like a British version of a young Jay Electronica, and his intense flow matches the subject matter and production well. He is a fine writer, but he is also very one-dimensional. "Reality Provoking Liberation" comes very heavy handed with political themes, to the point where about halfway through the record, it feels exhausted. Granted, being from America, I may not be the audience that Apex Zero is rapping (or in some moments preaching) for, but an important trait for an emcee is to be able to make all types of audience feel his or her music.

The production, handled primarily by Apex Zero, has a nostalgic 90s feel, but has enough of a twist to keep the beats from sounding like Havoc and A Tribe Called Quest clones. On one of the album's few standout cuts, "Obtain Bearing," he incorporates a Bollywood sample, which gives the track a very eerie vibe. The album's penultimate track, the 7-minute "Growth (Slay the Basilisk)" is another one of his stronger productions, which features some nice progressions that keep the track from dragging, despite its length.

I wouldn't call "Reality Provoking Liberation" a bad album, because I believe it accomplishes what it sets out to do. But unfortunately, just because it's successful in the fact that it tackles a lot of politically charged themes, inspired by Immortal Technique, doesn't make it an enjoyable record to listen to.