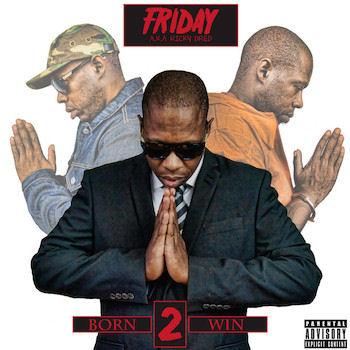 Initially I thought I was looking at a new Jay-Z record. The suit, the shades, the close cropped shave - everything about the artwork screamed Shawn Carter. Friday a/k/a Ricky Dred may admire Hova's dapper swag but he's his own man. He's a Montreal born and bred emcee, real name Kofi Carmichael, which immediately brought Stokely Carmichael to mind. Instead of expecting an album about trips to Paris and tributes to baby Blue, my mindset shifted to trips to Guinea and tributes to Ahmed Sekou Toure.

Neither one suit Friday that well, so instead I offer you a little of his real bio. Carmichael aspired to be a rapper since his youth in the 1980's, was once part of a rap crew called Southside, went to the Harris Institute of the Arts to study music marketing, wound up working for Warner Music Canada and even forming his own AWOL Records imprint. Unfortunately things unraveled for Carmichael in 2009 when he was arrested in late 2009 on drug related charges, ultimately being sentenced to 3 years and 9 months in prison. He got out on parole in 2011 and returned to his music career.

"I'm watchin everyone, waitin to see my next move
If you livin bummy no money they don't respect you
I'm the king on king a/k/a I will +connect+ you
to what you fuckin need - either weed, coke or ecstasy
The life expectancy is low so we say YOLO
and be anywhere the dough go with the vestes under the Polos
I'm crazy for that cocoa, streets is hot like Acapulco
So the federales raided and they caught me with a fo'-fo'"

Friday's honest about this chapter of his life on "Work," which also functions as the first single off the album - or at the very least the only one to get its own music video. 5 Star Beatz provides the backdrop, which starts off with a DJ air horn, and follows it with a hypnotizing repetitive melody. The lyrics deserve praise for their uncompromising look at Friday's life, but after listening to the same four notes repeat ad nauseum for 3:26, I'm ready for a change.

There are some bangers to be found on "Born 2 Win." Chenzo Kell rocks a guitar break on "Doin' Numberz" featuring Bunz, and instead of sticking to the same lick throughout, changes up the loop and adds elements to keep things interesting. "Amir" appears to be named after the producer Amir the Terrorist and he's earned it - he's got a very DJ Premier/Alchemist boom bap to his beat. Joey Cutlass also does a good job on "Hennessy Coloured Glasses," and Grampz turns in a soulful finale for the album on "Make It to Heaven" featuring Chris Webb.

Friday's frank honesty serves him well, admitting he "sold crack to pregnant women" and begging "God forgive me for all the drug flipping." The often flat delivery betrays him though. Carmichael tries so hard to speak matter-of-factly and seriously in his rhymes that he succeeds in enunciating each syllable, yet fails to have any excitement about his rhymes. It's as though you're sitting in the classroom listening to a teacher give the same speech he already had every semester for years, weary of both the process and its tedious nature. It's a shame because Friday has a compelling story of success, tragedy and redemption, but it is better in print than on wax.