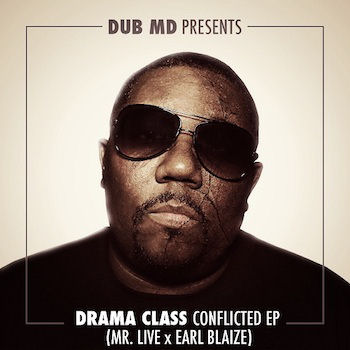 Most times when I see the name "Dub MD" it's for something I'm being asked to promote - a single, an album, a music video or a mixtape - whatever the case may be. Dub's not obnoxious about it like some publicists (who shall remain nameless) so I don't mind the blasts in my inbox, even if it's impossible for me to address every single one I get. The "Conflicted EP" marks the first time I've seen his name ON an album, although I'm not surprised to find he's not rapping on it. "Dub MD Presents" would have been more fitting, but since he chose to co-credit, I'm gonna keep it the way he wrote it. Even "Drama Class" needs more expansion though as it's two names you may already know - production by Earl Blaize of Anti-Pop Consortium and rhymes by Mr. Live, who among other singles dropped the humorous "Splashin Over Monica" with Tony Bones.

As the "EP" implies in the title, "Conflicted" is a short release clocking in at only 18 minutes long, which doesn't mean there's any time to waste. Each song has a woman's voice expressing an emotion or mindstate before the track begins, such as the word "confusion" before the title song, and the word "contentment" before "I Still Love Her." Here's the twist to all of this - even though Earl Blaize is one half of the group, he doesn't produce one half of the tracks. The aforementioned song, which also features guest vocals from a woman named Ghagged, was actually laced by Oddisee.

And if you're looking for a reason why, that's because this actually functions as a mixtape of sorts, which is probably related to the reason this is being offered as a free download. You'll immediately recognize the Jahlil Beats loop from the title track as hailing from Weezy's "I Don't Like the Look of It" featuring Gudda Gudda. Neither Earl nor Live is trying to perpetrate like they did anything they didn't - everything is properly credited and attributed. So let's break down the order of people involved: Dub MD presents Drama Class to you, DC is Earl Blaize x Mr. Live, but on "Conflicted" Blaize foregoes his own work the majority of the time to play Doo Wop or DJ Clue while Live plays Fabolous. It works. When Blaize gives his own music to Live for a track though on "Carmen Hayes" it's something special. Live sounds like the UK's answer to H to the Izzo. There's almost not enough material to rate "Conflicted" with a score, especially in the audio category when it comes to recycled beats, but I'm willing to say Blaize at least chose the blazing tracks for Live to rap and came up with some heat of his own at that. Live has been outside the margins in the states to date, paling in comparison to more famous "Live" rappers like J-Live, but Dub MD appears to be setting the table for Drama Class to change all that. I hope they eat well.