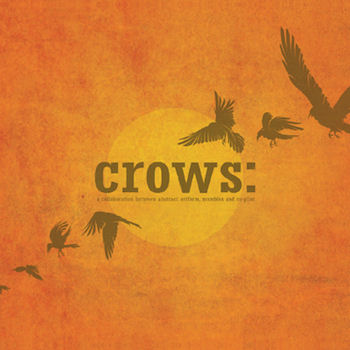 If you've heard "prairie rap group Abstract Artform" then you're one step ahead of me. It is the work of this Winnipeg based rapper that forms the core of an interesting new album by Crows:, and don't forget to include that colon at the end. "Remixes, Reboots and Alternative Versions" started with Canadian producer Mumbles fiddling around with some of Artform frontman Kid A's work, but it didn't stay that small for long though. Producer Co-Pilot joined the effort, and eventually all three decided on a collaborative effort that would include new tracks and alternate versions of songs first heard on the album "As the Crow Flies."

Both Artform and Kid A have described their sound in various places as "back porch rap," and though I've searched for a better descriptive for what Crows: is, there really isn't a suitable one. This album sounds like what would happen if a bunch of Canadian rappers and beat maestros emigrated to the Smoky Mountains of Tennessee, sitting out on the porch with their equipment, jars of moonshine tucked neatly between rocking chairs. They'd sit, they'd rock, they'd sip, and they'd record rap songs as the sun slowly set over the mountain peaks. "Grind" sums this up well: "Yeah I'm on the grind, like them rappers says/a country boy, hard work since back in the day/got love like rap with no pay." You can hear a snippet of "As the Crow Flies" below:

"We're Johnny Rotten, to Johnny B. Goode
+Never Mind These Bollocks+ when you see 'em in your neighborhood
Just how it is - no rest for the wicked
So we're getting little sleep, van's packed, on the road again
See more of the countryside..."

This album is ambitious and FOLKSY in the best sense of the word, meaning that it's informed by a casual and common sound that one would expect of the best unpretentious country rap, even though D-Sisive is about as far from the rural South as you can get on "The Hitchhiker." This isn't an overly long collaboration for the Canadian trio at 34 minutes, but even short instrumentals like "Intermission" have a sense of whimsy thanks to scratched in talk show radio samples over shuffling country strummed sounds. "Volume 10" only gets loud vocally - the rest is practically acoustic.

It would be easy to say "If you like Bubba Sparxxx or Colt Ford buy this album," but it wouldn't exactly be incorrect either. Some of my Canadian compadres like to tell me that around Calgary you could mistake yourself for being in rural Texas, right down to the cowboy boots and hats, so perhaps it makes sense in the end that the Crows: would fit right in with a group of rural Southern emcees without anybody blinking an eye.