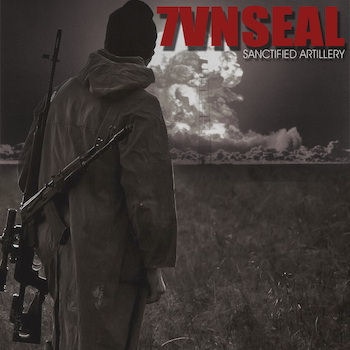 For the uninitiated, 7vnseal is a rapper and minister who pairs a Christian message with Wu-worthy beats. "Sanctified Artillery" is his latest release, and follows in the footsteps of his previous mixtapes. Expect hard beats mixed with militantly Christian rhymes.

The cover of this EP features a man with a sniper rifle and AK-47 strapped to his back watching a nuclear bomb go off in the distance. 7vnseal takes being a soldier of Christ literally. In his rhymes he fights the devil like a general fighting against hostiles. Take "Napalm Soldier:"

"Nigeria" puts 7vnseal's militaristic flow to good use as he talks about attacks on Christians in that country by Islamic groups. 7vnseal is full of fire and brimstone as he raps over a heavy Sampai Beats production. However, even at his most focused his message is often unclear. As on previous releases, 7vnseal seems to be mashing a whole bunch of Biblical imagery into his lyrics, often without much rhyme or reason:

"Yo this government's corrupt just like the day it was born
They trying to keep you trapped just like meat on the thorn
I'm trying to see (Harrod? heresy?) so I walk in holiness
I see you on the other side soon the afterlife"

The concept of making hardcore street rap with a Christian message is intriguing, and 7vnseal almost delivers. He's got good production from Sampai Beats and Black Symphany. He's got a gravelly, aggressive flow similar to Vinnie Paz. He's got Biblical imagery. What he doesn't have is a coherent message. His rhymes remind me of Lone Ninja or Bigg Jus: a lot of words that seem to point to something heavy and conspiracy-ridden, but don't actually make a lot of sense. That is not meant as a knock on 7vnseal's faith at all; I'm not belittling Christianity or saying that I don't understand the theology behind his rhymes. In order to do that I'd have to understand what theology he's trying to get across in his rhymes. Beyond a few references to scripture and many references to Christ, it's hard to follow just where 7vnseal is trying to take you. That's a shame, because he is clearly passionate about his beliefs, and is dedicated to his craft.