:: Hyperdub
as reviewed by Patrick Taylor 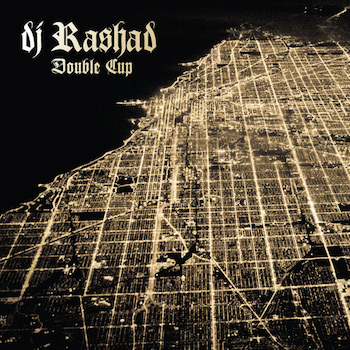 Chicago footwork DJ Rashad Harden died on Saturday at 34. It's always tragic when someone dies so young, but it is even more so with DJ Rashad given that he was just starting to truly blow up on an international scale. His last album was put out by Kode9's influential Hyperdub label, who are probably best known for releasing music by innovative dubstep artists like Burial. Listening to "Double Cup," it's not hard to understand why DJ Rashad's music excited so many listeners, musicians and critics.

For those of you not familiar with footwork (as I wasn't until I saw it associated with DJ Rashad's music), it's basically ghetto house music sped up to ludicrous speeds. The name of the genre comes from the intricate and insanely fast style of dancing that people do to it. Watching footwork dancers is like watching normal dancers in fast-forward. It's become a competitive dance, with two dancers going toe-to-toe to prove who has the better moves.

"Double Cup" gives several good examples of why footwork has gotten so many kids working on dance moves. It combines the janky, clattering snares of street rap with the BPM's and aggro of jungle. Rashad doesn't flip samples, he repeats them over and over again until it sounds like the singer has a stutter. Imagine the attitude of street rap with a touch of house soul revved up to drum n' bass speeds and you have footwork.

When your music is based on speed, there is only so fast you can go before it becomes a limitation. Slayer slowed things down after the blistering speed metal of "Reign In Blood," and DJ Rashad takes the tempo down on much of "Double Cup." On several tracks he builds in the hyperactive footwork elements into a more laid-back tempo. Album opener "Feelin'" still has the chattering hi-hats and stuttering piano lines, but it is placed along a smoother, more languid backdrop. It's like chillout music for someone with ADHD. The title track starts out hyper and aggro, but then slows things down, only to build the frenetic elements back in.

Rashad was allegedly found with narcotics and drug paraphernalia, which has led some to speculate that his death was due to an overdose. Whatever the cause of his untimely demise, "Double Cup" is a very drug-centric album. "Pass That Shit," "Drank, Kush, Barz," "Reggie," I'm Too Hi" and "Acid Bit" are just the tracks that mention drugs in the titles. The music is druggie as hell too. There is the amphetamine rush and kush comas you'd expect, but there are also psychedelic elements. "Acid Bit" is a crazed drug trip that recalls Wink's "Higher State of Consciousness," and "I'm Too Hi" perfectly captures the feeling of taking one or too more doses than recommended by the surgeon general. If Rashad truly did overdose, it is both ironic and sad that he made a song about overindulging.

The drugginess is only one element of "Double Cup," albeit a notable one. What really makes this album special, and makes DJ Rashad's passing all that more sad for music fans, is how expertly he is able to weave in and out of different genres. He can go from the ratchet hip-hop of "She's a Go" to the smooth R&B of "Let U Know" to the silky house of "Leavin'" to the West Coast gangsta lean of "Pass That Shit." In Rashad's hands hip-hop, techno, house, R&B, and footwork all coexist simultaneously. It's a shame he didn't get to live long enough to blur the lines between genres even further.