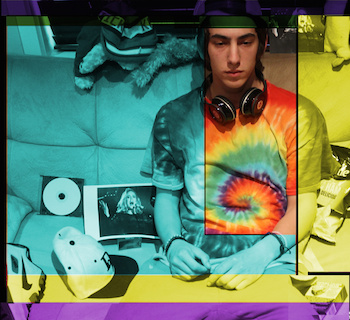 Giovanni 'Gio' Agosta is reputed to be the next thing in hip-hop from Australia, if not the next big thing regardless of country of origin. It's not easy to pick out that he's an Aussie on his album "Real" aside from his periodic use of the word "mate," which could just as easily make him British. He doesn't have the distinctive vocal inflection and vowel usage one associates with (or stereotypes of) a Southern hemisphere emcee. That may be because Gio considers his biggest musical inspirations to be Bob Dylan and Lil Wayne - it's hard to imagine you'd wind up rapping like Muph or Maundz if those were your influences.

"I Feel Like" exemplifies just how eclectic Gio's rap style is. Thankfully his crystal clear diction doesn't have the muddy incomprehensibility of Dylan's delivery, but his singing swing probably has more in common with Bob than Dwayne. Producer Mark Belcastro walks the line between clean and dirty with the instruments in a pleasant manner that drifts along like AM radio hip-hop as Gio laconically raps "I'm just chillin' on the couch, got a doobie in my mouth/couple screws loose off in my head." He jumps into sing-song at the end of his first verse, then sings the chorus of his song, and Belcastro manipulates his vocals to make Gio his own high pitched background singer. The Dylan influence comes through - he sounds like a rapper from the 1960's who intentionally unplugged from society. Gio operates almost entirely solo save for the appearance of Jimmy Cupples on "Dear Bup," a song which gives me PM Dawn flashbacks (not in a bad way). Gio seems a rather carefree lad as he jumps back and forth between singing and rapping, goofing around with vocal distortion on "Drunk Playing With Automation," eschewing the praises of a sandwich on "Toasted Cheese" (U.S. readers would call it "Grilled Cheese") and his hardest song would have to be "Don't Go Nowhere" - and by hard I mean Pharcyde or Aceyalone. Belcastro turns in some boom bap for Gio's rap but he's no gangster on these beats - he just wants you to "turn the speakers up" and politely says "if you ain't down with this then you don't know what you missin'." Gio vows that he's been "working on this every day since 14" and he's only 19 now, which is the good news/bad news part of this review. Giovanni is a pleasant enough young man, and anybody who enjoys the lyrical musings of Mac Miller or Wiz Khalifa would be at home with tracks like "Party" and "I'll Be There For You." He curses a little more than would make some parents comfortable, but a radio edited version of either song could comfortably slide into rotation. I'm more than willing to admit his publicist is not wrong about Gio's impending success - but at 19 the most profound life experience he can share is that he's been rocking mics for 4 years. Gio wants everyone to know he's a musician, not just an emcee, so I give him that credit on "Real." He's certainly true enough to himself to warrant the album title, but he's also "real" as in really well adapted to global distribution and really ready to hit the charts. There's not enough of his own personality here, accent or not, for me to do anything but listen casually and forget him gradually.