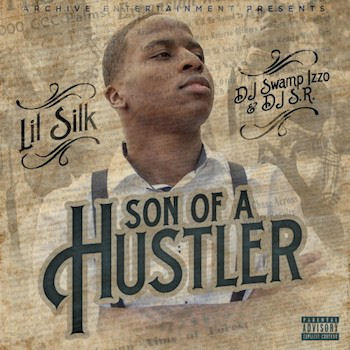 I'm starting to think the twenty-teens are going to be all about rapping with a weird voice. You got Kendrick Lamar, you got Chance the Rapper, you got Migos, and now you got Chicago-born, Atlanta-raised Lil Silk. You can blame/give credit to Lil Wayne for the amount of rappers getting goofy on the mic. I'm sure at some point soon it will get old and the pendulum will swing back towards ultra-serious deliveries, but for now I'm enjoying how bizarre some of these rappers sound. I'm had decades of listening to dudes proving how tough they were. It adds a nice element of unpredictability when you have an MC who sounds straight up crazy.

Like a lot of people, I came onto Lil Silk from his "Rapper" video. That's the one where he's rapping about being a rapper with two women in matching lingerie shaking their asses. Lyrically, it's typical street rap. Lil Silk is rapping about being rich and smoking weed. He rhymes "rapper" with "wrapper" to illustrate that he is truly the son of a hustler, as in "Lil Silk's a rapper/Big Silk's a wrapper."

What sets it apart (besides the half-naked women) is his delivery. He has a high-pitched yelp that sounds equal parts crazy and silly, and he combines that with some bizarre metaphors that recall Lil Wayne in his prime: "Whips like massa/'Bout to take off like NASA" or "You a square like a cubicle/And I've been grinding so long I'm a skater (Tony Hawk!)"

Then there is Legacy's beat. It combines snapping snares and high hats and dramatic synths with elements of downtempo electronica and trance. The booming 808s sound over a delicate piano melody. It hits hard, but there is also a softness to it that is disorienting. The beat allows Lil Silk a lot of room to insert his yelps and "Oh My GAWDS!" Despite having 12 different producers, almost all the songs on "Son of a Hustler" follow a similar template, combining electronic music with trap drums. It's a formula, but it's a formula that works. Lil Silk's voice is a nice contrast to the ethereal feel of the beats, just like the heavy drums are a nice contrast to the pretty melodies. It adds to the weirdness of the mixtape, making it feel like it was recorded in a ghetto on Mars.

While Lil Silk drops many good one-liners on "Son of a Hustler," he's not quite up to "Dedication" era Lil Wayne. Silk's rhymes aren't as complicated as Wayne's. He favors the simple, repetitive style of contemporaries like Migos. Why use 500 words if 100 will do? HIs weird-ass delivery does a lot to make the pretty average lyrical content seem more impressive than it is. There's nothing on "Son of a Hustler" content-wise that you haven't heard 1000 times before: songs about getting stoned, partying, having sex, driving nice cars, and killing your enemies and keeping quiet about it. What's unique is Lil Silk's joyfully bizarre way of spitting his rhymes.

Lil Silk may end up being just another novelty, but I think there is some genuine talent in the young rapper. There's a boundary-pushing element to this mixtape that has definite promise. Sure, Lil Silk is putting on an act, but I think he's also actually kind of a weirdo. "Son of a Hustler" keeps hip-hop weird, and makes for a fun and confusing listen.