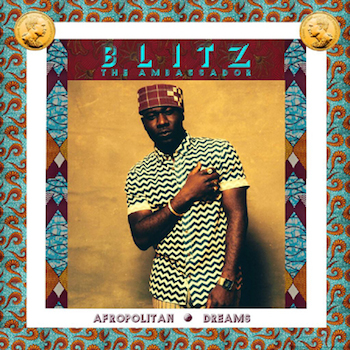 First and second generation African immigrants increasingly contribute to American rap music and R&B. Artists as diverse as Wale, Chamillionaire, Tyler, the Creator, Nipsey Hussle, Oddisee, Phil Ade, K'naan, French Montana, Emmanuel Jal, Akon, Jean Grae, Earl Sweatshirt, Lil' O, Ohene, 88-Keys and Chiddy have an African parent or were born to African parents who at some point lived and worked in the US or they made the decision to relocate overseas by themselves. A native of Ghana, Blitz the Ambassador belongs in the latter category, his academic studies taking him to Ohio before he settled in Brooklyn, where he also started his rap career. What separates Blitz from most of the aforementioned is the intermediary role that he plays between America and Africa. It's a position he can assume more easily than others because he was born and raised on the African continent.

On "Afropolitan Dreams" he continues his mission to bridge the Atlantic with music that draws inspiration from both sides, with the supporting arch of this 'bridge' made up of upbeat '60s and '70s soul and rhythm & blues informed by afrobeat and highlife provided by a cast of musicians who contribute to the classy, timeless sound overseen by Blitz and Optiks. "Love on the Run" has the three-dimensional shape of a classic Isaac Hayes production. "Dollar and a Dream" is built on guitars and flutes that shift between blues and funk. "All Around the World" has enough reverb to resound from Ghana all the way to guest Marcelo D2's home Brazil, creating another transatlantic connection by way of black music. The smoothly swinging "Success" is reminiscent of Jay-Z's "American Gangster" outing. On "Internationally Known" frantic drums and horn stabs make up a stripped down but turned up production that achieves a modern sound with real instruments. Meanwhile "Africa Is the Future" and "Make You No Forget" capture that African spirit with light-toned guitars and vocals, the former featuring an international cast of MC's, the latter Fela Kuti's son Sean.

Many of the songs are, so to speak, eagerly waiting backstage to go on, supporting Blitz' repeated references to living life on the road. At the same time the album contains sonic extras like train station announcements or phone company operators that tie into a narrative that is systematically advanced by the rhymes. "Afropolitan Dreams" deals, through the lens of Blitz' own experience, with the the trials and tribulations of young African professionals living abroad. While the rapper's own story is always present, he brings up issues that concern the entire diaspora. On "Success" he details how the need to succeed weighs on emigrants, especially the younger generation. "Call Waiting," featuring superstar Angélique Kidjo, tells of the difficulty to stay in contact with loved ones. The album is bookended by two tracks that offer a look at the bigger picture. On "The Arrival" Blitz relates how migrants are prone to maybe not forget where they come from but to lose sight of the conditions back home. Conversely, he tells Africa that "this life that we livin' overseas, believe me, it's not as easy at it seems." On "The Departure" he makes the oft-cited connection between griot and hip-hop musician, a point traditionally brought up by scholars, but rarely in rhyme form, at least not as deliberately as the Ambassador does it:

"I'm standin' at the crossroads of life
Watchin' as the parallel universe collides
On one side a man whose past foretold a prophecy
The other side a man whose future beholds the legacy
One reps the royalty, the voice of the kingdom
The other knows his loyalty, the hood that he came from
One plays the kora, djembe, xylophones
The other rocks the MP, turntables, microphones
They both tell the stories of the warriors that passed
One on the battlefield, the other's on the ave.
One memorizes, the other one writes this
One tells the village, the other tells the projects
And they both on the road less traveled
Separated by time, the future unraveled
From the ancient Mali empire to the Empire State
From Sundiata Keita to Jam Master Jay
Let the story be told"

"Afropolitan Dreams" is not your average rap record. The conceptual nature, the musicality, the attention paid to detail, the unique perspective are simply not typical characteristics of contemporary rap. In seasoned listeners it is likely to evoke memories of Black Star, Black Thought and The Roots, J-Live, etc. and yet it goes beyond a vague awareness of rap's roots in the motherland. In fact Blitz the Ambassador faces forward, a position best exemplified by "Africa Is the Future," where he reveals a very clear vision of Africa's future:

"Welcome to the future
United States [of] Africa, we salute ya
A new state of mind, I'll introduce ya
Close your eyes and visualize the rise of a new paradime
Solar-powered skyscrapers, it's bound to blow your mind
Just launched another satellite flight into orbit
The African space programm - it's so ironic
How our currency's worth more than the dollar or the euro
Without the foreign aid unemployment near zero
Cause we never practised capitalism or socialism
We got Africanism, and that is how we livin'
Not Anglophone or Francophone, we got our own
No more corporations exploitin' us in our home
Time-travelin', unravelin' the truth
Cause we figured out the West could not live without the wealth we produce
And now our image is controlled by us, so hold steady
Africa's future is now, so get ready"

"Afropolitan Dreams" isn't superior because of its message. It's simply a well executed and worthwhile alternative to the kind of rap people regularly complain about (but still pay attention to). It's a niche product, but as a companion piece to Asheru's precious "Sleepless in Soweto" from last year, it fits so nicely into its niche that it stands out all the more.