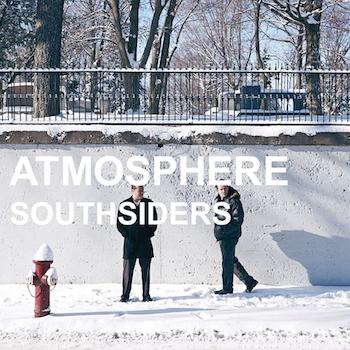 Atmosphere have mellowed since the days that Slug used to rap about his romantic troubles, sexual escapades, and tendencies towards over-consumption of booze, cigarettes, and drugs. This mellowing has happened over time. After a 2003 incident in which a young woman was raped and killed by a janitor at an Atmosphere show in New Mexico, Slug's lyrics got more serious and less sexually irresponsible. A series of copyright lawsuits convinced Ant to stop digging crates for beats and start working with live musicians. Turning 40, getting married, and having kids was the final nail in the coffin of Atmosphere's younger, smart-ass persona. There's nothing worse than an aging hipster and you don't want to be the 40 year old who still parties like he lives in a fraternity.

Atmosphere have put aside childish things as they've matured, and their sound reflects that. 2008's "When Life Gives You Lemons, You Paint That Shit Gold" was their first foray into Grown Man Rap. It was a collection of downtempo, muted explorations of poverty, abuse, and other studies of imperfect characters. 2011's "The Family Sign" kept the somber tone and focused on families, including good relationships, abusive relationships, and bad daddies. They continue on the same trajectory with their seventh album, "Southsiders." Those hoping that the duo would return to the more uptempo feel of "Bam" or "We Love the Things That Hate Us" are in for disappointment. Most of "Southsiders" is as grey and depressing as the neighborhood it is named after (at least if liner photos are accurate).

"Bitter," the first single from "Southsiders," is also the album's weakest track. Slug's sing/rapping sounds like Anthony Kiedis of the Red Hot Chili Peppers, another group who have mellowed with age. The chorus is terrible, the lyrics aren't great, and it sounds like an outtake from "Lemons" or "The Family Sign." On hearing it I had to wonder if Atmosphere were destined to keep writing the same ballad over and over again like the Red Hot Chili Peppers have been doing since "Under the Bridge?" Second single "Kanye West," is better, but not great. It also points to the two biggest weaknesses of "Southsiders" as a whole.

The first is the beat. "Kanye West," like "Bitter," like almost all of the songs on their last three albums, is downtempo and dour. It is the opposite of a banger. It is not the song you put on when you want to get pumped up or feel like you can conquer the world. It is not meant for the club. It will not start a street dance craze. Of the fifteen songs on the proper album, only two of them (the title track and "The World Might End Tonight") could be said to be uptempo. Everything else is either mid- or downtempo, which gives the album a subdued feel. That's not to say they are bad (more on that later), but they aren't exactly energetic.

The second issue with "Southsiders" that is evident in "Kanye West" is that Slug is struggling lyrically. Too often on the album he relies on irony (saying "put your hands up if you DO give a fuck" on "Kanye West," rather than the more common "put your hands in the air if you just don't care"), cliche, or making no sense. "Star Shaped Heart" has a line, "The handprints are bloody/Because the puppy outran the bunny," which almost ruins what is otherwise a good song. Even "Flicker," a powerful song about the rapper Eyedea, who committed suicide in 2010, has some seriously dubious lines like "When I hear your smile it's outlined in sadness/You poked holes in the magic." There are many adjectives I'd use to describe Slug's lyrics - self-punishing, insightful, sincere, nakedly honest, cynical, poetic - but cheesy is not one I'd normally use. Yet there are several moments on "Southsiders" where Slug is downright cheesy.

Those criticisms aside "Southsiders" is still an Atmosphere record, which means it ultimately redeems itself. Slug always manages to kick you in the guts with his rhymes. Even when he's depressing, Ant still maintains an old-school feel in his beats even when he's working with guitars and synthesizers. He might build a track entirely around reverbing guitar, but you better believe it is going to have banging drums. His beats hit hard even when they are mellow. The bluesy wail and handclaps of "Arthur's Song" might not work well for dancing on a pole, but they hit you where it counts. The piano and synthesizers of "Fortunate" manage to convey a sense of hope and promise that matches Slug's lyrics. By sampling live instruments, Ant manages to capture both the homey feel of analog instruments and the percussive repetition that comes from flipping breaks. "Southsiders" may not be the most exciting album, but it sounds good.

And then there is Slug. Slug is a consistently interesting rapper, and one of the few MCs who are willing and able to tackle such personal subject matter. His domestic bliss may have dulled his edge, but he still manages to offer biting insights into the human condition with serious microphone skills. He can be neurotic: on "Fortunate" he raps, "I highly doubt y'all think about sex anywhere near as often as I think about death." He spends a lot of the album analyzing friendship, what it means to get older, romantic relationships, and how to keep moving forward when the whole world seems like it is going to shit. When he's flossing, he's dropping knowledge with his daggers. "Southsiders" is a takedown/love letter to the neighborhood he came up in, and Slug sounds like an OG calling out all the young kids:

I pre-ordered a physical copy of "Southsiders" even after I had spent a week streaming it for free. I rarely buy CDs anymore, but I knew I needed a hard copy of this album. For one thing, Rhymesayers always puts a lot of care into their physical product, making it worth the purchase price. For another thing, while Atmosphere may stumble at times, they get it right enough to make anything they do worth listening to and worth paying attention to. While the line in "Flicker" about poking holes in the magic is a misstep, Slug closes strong:

It's lines like that that keep me coming back to Atmosphere's music, and make "Southsiders" another solid entry into the Atmosphere catalogue, warts and all.