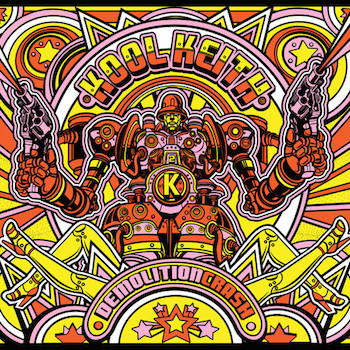 Kool Keith has no intention of quitting. We're long removed from his Ultramagnetic 1980's and his indie rap icon 90's at this point. Keith thrives on the reputation he built up in those respective decades, even though the music he's released since the dawn of the millennium is highly variable in terms of its impact and listenability. He's capable of Masters of Illusion levels of dopeness, and the occasional above average "Love & Danger" album, but Keith lowers his own batting average with subpar material that should have never left the studio. His worst enemy is his own prolific nature - he can't help but crank out more material even when he should hold back a little bit.

"Demolition Crash" exemplifies every single one of the qualities of Mr. Keith Thornton outlined in paragraph one. At the outset one can't escape the fact this is a double disc/double album release - an incredibly deep 27 songs clocking in at close to two hours worth of music. Even the most dedicated of Kool Keith listeners, a category your humble reviewer certainly belongs to, will find this a daunting amount of material to get through. The album's title is instructive. The carnage of "Demolition Crash" is exciting, and the result afterward is a twisted pile of audio wreckage, which you need the "Jaws of Life" to pull apart songs in search of the surviving dope. On tracks like "Durant & Westbrook" it's impossible to rescue the good from the bad - they are hopelessly intertwined together.

Keith: "They usin my past beats
Just to stay on the pants like a crease
Your dime like to get down on one knee
Holdin the football for me to kick so smooth
I take a bath while she takin a shit
I'm the new building, New York's tallest
Women get soaking wet
Panties drenched retarded..."

Keith's obsessions with sexuality and scatology are par for the course and perfectly acceptable, but him bragging that "AutoTune is back" and singing his way through a dick-sucking chorus using said same is not. The beat leaves something to be desired as well - not so much "bad" as just plain boring. It repeats the same low electronic whine over and over, soaring over your ears like a plane coming in for a landing, but it never quite seems to reach the airport. Prince Metropolis Known is one of Keith's better proteges, but his presence neither adds nor subtracts from the song - it's just there.

There are guest emcees on "Demolition Crash" that add significant value to the proceedings, but with over two dozen songs they get spread too far and thin. Andre the Giant is a New York legend of equal stature to Keith and his voice is welcomed on "El Dorado," which also has a stripped down pleasant musical background. The scratched in hook is one of the album's highlights too - "Know what I mean?"

Other worthwhile guest appearances include Rah Digga's trademark deep and rugged flow on "Non Stop," friend Big Sche Eastwood on "Ricky Flair" and "500 Horsepower" among others, and newcomer Kidmiddi on the electronic groans and moans of "Freak Out." In the course of 27 songs though Keith tends to repeat himself though, and if you take the album sequentially you'll feel the burden of it by "Pro Basketball." He's still scatological after a whole album full of it - wantonly bragging "I'm so arrogant you change my diaper... I'm a diarrhea writer." Unintentionally apt or not it's true - Kool Keith puts out a lot of shit. Spread out over several albums, "Demolition Crash" would have been much more successful, as Keith is easier to digest (or as he'd have it easier to shit) when you get smaller servings. There are gems amongst the turds, such as the smooth groove of the five minute long "Spinning Wheels" with Mr. Wonderful, and hilarious declarations like "I'm not a pimp or nothin', I'm just a regular nice motherfucker" on "Euphoric R&B." Keith can't help himself but go to excess though, and the excesses become boring when the lyrics and beats of songs like "Strip Club Husband" and "It's Allright" become interchangeable. For unknown reasons he spells "alright" with two L's. For unknown reasons he decides that more is better. For unknown reasons Keith is unable to reign in his creative impulses. "I'm what all studios in the world can't ignore" brags Keith, but the irony is that it's just the opposite - he releases so much material that even dedicate fans can skip out on a lot and not feel that they've missed much at all.