Death Grips :: Niggas On the Moon :: Third Worlds
as reviewed by Patrick Taylor 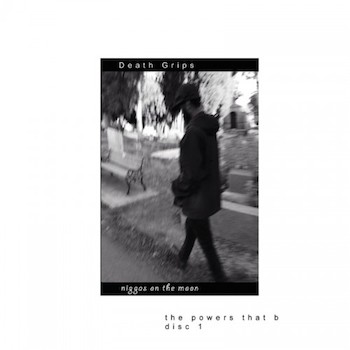 "Niggas On the Moon" is the fourth album in three years by Sacramento group Death Grips. Their early work sampled Pink Floyd and Black Flag, and their later work has gone in different but equally loud direction. After last year's cacophonous "Government Plates," I was ready to write the trio of MC Ride and producers Zach Hill and Andy Morin off. I figured they had taken the group's template as far as it could go, and I had heard all I need of Ride screaming about sex and drugs over clattering industrial beats. Their latest album, which is supposed to be the first half of a double album, proves me wrong. It's more interesting and more listenable than "Government Plates," and sees Ride maturing as an MC. (I realize it's unfair to review a double album based on only half the album, but it's the length of the album and was released first, so it seems like fair game).

All of the songs on "Niggas On the Moon" are built around samples of Icelandic avant-garde pop star Bjork. Death Grips did some remixes for Bjork, and she returned the favor by appearing on this album. That doesn't mean that she is singing hooks, or that Death Grips are sampling "Big Time Sexuality" or "Oh So Quiet." Instead, they take a snippet of her voice and give it the Death Grips treatment: filtering it almost beyond recognition and repeating it at 120 BPM. It's a similar thing that they did with synthesizers and sirens and drums on "Government Plates." The big difference is that Bjork's voice filtered and worked over still maintains its soothing, ethereal quality. The result is beats that have an almost ambient feel even as they hammer and hiccup and stutter.

This kindler, gentler backdrop gives Ride room to do something besides scream. His vocals are sometimes quiet and calm, which gives a nice contrast to his explosions of aggression.

On earlier releases Ride came off as a crazed, drugged-out lunatic who seemed minutes away from an overdose or serious bodily harm. The incarnation of Ride on "Niggas On the Moon" is more sustainable, with less focus on drugs and being aggro and an overall more psychedelic feel.

He still raps about sex and drugs, but the real focus is on trippy stream-of-consciousness, like "Xerox man dressed in gauze spiders silk in menopause." Take the lyrics to "Voila;" they seem to indicate that the title has more to do with getting really out there than anything NASA is up to:

As on "Government Plates," Ride's vocals are not always front and center in the songs. Death Grips seems to be moving away from the rapper/producer mold and moving towards something different. There are a couple almost instrumental songs where Ride is barely present. Even on the songs where he's featured, he's just another element in the mix rather than the star of the show. And also like "Government Plates," "Niggas On the Moon" is eschewing traditional song structures. "Viola" is the most vivid example, whiplashing between minimalism and complete insanity in an instant. There's not a lot of verse-chorus-verse going on here.

"Niggas On the Moon" is a return to form for Death Grips, but it isn't perfect. For one thing, the songs feel more like eight variations on the same concept than eight distinct tracks. That's neither surprising nor unforgivable given the experimental bent of the band, but you can't help but notice the sameness when you listen to the album. The album also doesn't solve the quintessential Death Grips dilemma, which is the fact that their music is kind of annoying. If you aren't in the mood for noise, then this is not the record for you. What it has going for it is that it doesn't sound like anything else anyone has going right now, and it shows artistic growth. Plus, it's available for free, so you'll only be out time and hard drive space. If you are in the mood for hip-hop that pushes the envelope, or music that manages to be soothing and aggro at the same time, "Niggas On the Moon" has you covered.