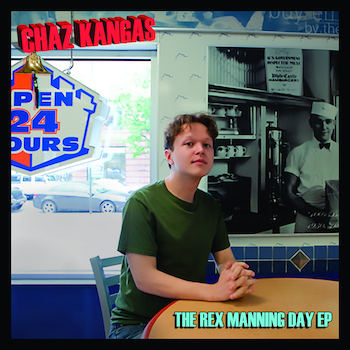 Chaz Kangas stays busy as a writer for the Village Voice and a social media commentator when he's not recording new music. He's one of those artists I always think about as being "on the scene" even when he's not in the studio - he's always up to something. Frankly Chaz makes it easy for me to perceive him this way because I get regular updates about what he's up to, between messages about his latest thoughts on the latest WWE Network special event or program. That's right - Chaz is a wrestling head. Not surprisingly he channels that love of wrestling on his latest single "Travel Size," which samples from one of the most spectacularly insane athletes of all time - Scott Steiner. "I'm a genetic freak, and I'm not normal!!"

Listening to Steiner attempt to do math, let alone discuss just about anything under the sun, is entertaining in and of itself. He's an easy guy to sample on a song just because of how outlandish his typical wrestling "promo" tends to be, but it's more surprising to hear a cameo from indie fan favorite Colt Cabana on the song "She Will Be Mine" (some of you may remember his brief WWE run as Scotty Goldman). He's essentially playing the role that Mike Tyson did on the famous "Second Round K.O.," encouraging Chaz Kangas to take emcees and "get in there on those lyrics, and twist these motherfuckin lyrics' arms four, five, six times, 'til that fucking thing pops off man!!"

To some degree this EP could be said to be target marketed to a listener just like me, given that there are inside jokes directed to wrestling fans, like Kangas doing Macho Man impressions and referring to legendary squared circle stars like Keiji Mutoh (b/k/a "The Great Muta") on songs like "Eureka." If I know Chaz though (and I kinda do) he doesn't want to be pigeonholed as "the rapper who raps about wrestling." Wrestling happens to be part of pop culture, but so is "Rex Manning," a fictional aging music star who was played by Maxwell Caulfield in the cult film Empire Records

. Everything on this EP is a send-up of pop culture on that same level, including a hilarious concert tour intro which promises "nuns in a blender" and "live on the bear stage, a grizzly BEAR, a black BEAR, a panda BEAR, a kodiak BEAR..." among other four legged ferocious predators.

Kangas packs a lot of value into a six track, 18 minute EP, and shares a lot of the spotlight with guest stars like Jus Daze, DC Pierson and Albert Rhymestein. If I have to knock anything about the release, it's that not all of the songs are a home run musically. The biggest posse song of the EP "Rogues Gallery" actually winds up being the least impressive, and it's certainly not the fault of the emcees on it. "She Will Be Mine" and "Travel Size" are certainly worth the cost of admission, which is relatively low given it's a Bandcamp release and Chaz is not the greedy sort. As a friend and a fan of Mr. Kangas I can recommend "Rex Manning Day" for the humor value and lyrical skill, as Kangas takes everything seriously about rapping except for himself. As a teaser for an album to come this works, but for his next full release I expect better production to go along with the humor and the rhymes.