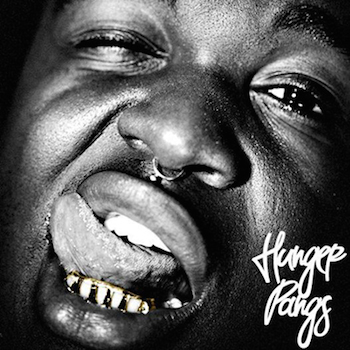 It's been exactly a year since Jay-Z was "voguin' on these niggas" in his rap song-turned-art happening "Picasso Baby," which would be the clearest nod to the gay community in all of mainstream rap music history if it wasn't for Macklemore & Ryan Lewis' surprising success and the subsequent attention to "Same Love" the same year, but that doesn't mean that the doors are now wide open for MC's who truly are represented by the rainbow flag.

To be clear, 'gay pride' to Cakes Da Killa means to unapologetically flaunt his sexual orientation, nothing more, nothing less. Far from politically correct, his favorite words on his latest are 'nigga,' 'bitch,' 'shit' and 'eat.' As he adopts rap's aggressive rhetoric, his translation efforts are minimal, as evidenced by statements that are to be interpreted within a LGBT context but actually make sense in both worlds. Although regularly finding a wider public, rap often addresses a very specific recipient, and it's no different with Cakes Da Killa. He stages a virtual 10-round catfight where he keeps the upper hand, admonishing "infant-ass niggas in my hand-me-downs."

Correct gender identification may pose a problem to listeners not used to this particular subculture's slang and nomenclature, but the real burning issue here is the appropriation of homophobic slurs. Insiders may argue that what Cakes himself dubs "Gully Cunt slang" is common practice in certain circles, still it's hard to accept the existence of a line like "I will slay a fuckin' fag with no issue" on a gay rappper's track. By the same token we've willingly accepted hateful language from African-American rappers that came bizarrely close to Ku Klux Klan verbiage, so we'll likely let homosexual rappers tear each other apart as well. Sarcasm aside, there are other ambivalent statements that could actually be explained by the artist, such as "I was never here for the faggotry / I guess [that's] why these gay niggas mad at me," but at this point he lacks the eloquence to expound on it. In any case "Hunger Pangs" makes for a confusing listen (beyond the general issue of sexual orientation and the mysterious sexual power struggle the character is engaged in) because indeed he goes from "comin' through with 30 faggots on the come-up, and we all some 730s" to "kiki'ing at multi-million dollar mansions / posh livin' with hood niggas in the Hamptons" in the same track.

Nebulous definitions aside, Cakes Da Killa may focus on a target audience for the moment, but he has the talent to go further. From a rap point of view, he's licensed to talk smack to fellow gays, but he may want to consider taking his aggression out on the rest of us (i.e. society) as well. He seems destined for it, with a confession like "If I said it, take it literal / I was never too keen on subliminals." The potential is even greater when considering the artist's wit, enthusiasm and undeniable sense of style.

After last year's "The Eulogy," Cakes Da Killa remains a serious challenge in many respects, with the added bonus that he actually has skills. Lyrically "Hunger Pangs" is as disappointing and one-dimensional as any release these days, but as a rap artist he has balls like few on the scene right now.